Every week, Stampede Blue's Josh Wilson will take an in-depth look at Andrew Luck's game from the previous weekend. Today we look at his performance in the eighth game against the Houston Texans.

No quarterback in NFL history had ever led 10 game winning drives in his first two years in the league. Andrew Luck became the first on Sunday night.

Playing in just his 24th career game (25th if you include playoffs), Luck recorded his 10th game winning drive, an NFL record for a quarterback through his first 2 seasons - and Luck still has 8 games left in his second season. To go along with that, Luck also notched his 7th fourth quarter comeback.

By comparison, in his 24 regular season game Andrew Luck has only lost 7 games. That means he has as many fourth quarter come from behind wins as he does total losses.

Game winning drives and fourth quarter comebacks have become commonplace for Andrew Luck and company, and we have already come to expect them. But in order to even get a chance at his 10th game winning drive Sunday night, Luck had to overcome a big deficit. Down 18 points with just a little over a quarter left to go, Luck and receiver T.Y. Hilton then caught fire. In a span of 11 minutes and 5 seconds, Luck found Hilton for 3 touchdown passes and found Coby Fleener for a 2 point conversion.

Of all the game winning drives, this was the most incredible. The Colts played so poorly in the first half that they had no business winning that game whatsoever. But this is a resilient team led by their unflappable quarterback, and as a result the Colts quickly climbed their way back in.

Andrew Luck misfired on passes. He missed open receivers. He made poor decisions and looked rattled - the first time this year that has been the case. But playing without his top two wide receivers behind a line that was awfully terrible and with a running back who was averaging just 2.5 yards per carry and with bad play calling from his offensive coordinator yet again, it was hard to blame a lot of it on Luck. And then Pep Hamilton went to a no huddle, shotgun passing attack, and the whole game was turned around by a quarterback who suddenly began throwing perfect rockets again and a receiver who proved that he is a matchup nightmare and legitimate threat no matter what the circumstances.

In the first half, Luck was constantly under immediate pressure and his receivers couldn't catch the passes he did throw. His numbers were awful: 3 of 12 (25.0%) for 56 yards (4.67 yards per attempt) without a touchdown and led the offense to only 3 points.

Here is a chart of Luck passing by drive as the night went on. You can clearly see the improvement as the game went on.

Andrew Luck turned the worst performance of the year from the Colts into one of the most incredible comebacks in a long time. He is a special player and has the uncanny ability to ensure that the Colts in fact are never out of it. He maintained that point at halftime, and the Colts followed their leader. They followed him to an 18-point comeback and 27-24 victory over the division rival Texans (whose season was on the line) and took a major step towards the AFC South title.

We have come to expect fourth quarter comebacks out of Luck, but this one was unexpected - which makes it even more incredible. 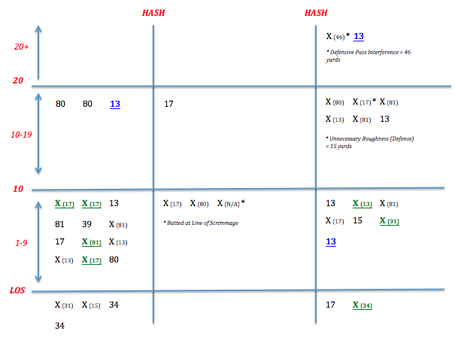 As I already mentioned, Andrew Luck led his 10th game winning drive and 7th career fourth quarter comeback on Sunday against the Texans. He has had fourteen career games where he has had a chance at a game winning drive, and he has led the Colts to wins in ten of them. Below is a chart of each attempt, as well as Luck's individual statistics on the respective drives and the outcome of the game. 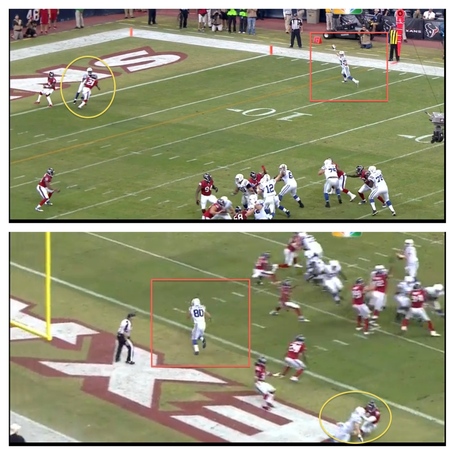 <blockquote class="twitter-tweet"><p>Want to be impressed by Andrew Luck? Watch his demeanor after every drive motivating teammates regardless of results-oh and he can ball 2</p>&mdash; Doug Gottlieb (@GottliebShow) <a href="https://twitter.com/GottliebShow/statuses/397371714180374528">November 4, 2013</a></blockquote>

<blockquote class="twitter-tweet"><p>Pagano says Andrew Luck was the 1st guy in the locker room telling guys not to panic, stick to the process during halftime last night.</p>&mdash; Kevin Bowen (@KBowenColts) <a href="https://twitter.com/KBowenColts/statuses/397476649551151104">November 4, 2013</a></blockquote>

"This is Andrew Luck's division, and the Texans are just living in it."

"The night was supposed to be about Case Keenum. Instead, Andrew Luck stole the show.

"Luck led the Indianapolis Colts on four scoring drives in the second half on Sunday night, wiping out an 18-point deficit and lifting his team to a stunning 27-24 win over the Houston Texans."

Peter King, the Monday Morning Quarterback, on the Colts at number two on his "Fine Fifteen," rhetorically asks:

"Any doubt left that the Colts made the right pick in the 2012 first round?"

Mike Florio, Pro Football Talk, on the Colts at number three in his power rankings:

"Andrew Luck is so unfazed by the prospect of engineering a late win that the rest of us are now unfazed when he does it."

Frank Schwab, Yahoo Sports, on the Colts at number one in his power rankings:

"The fact is, they have the best set of quality wins in the league. And Andrew Luck is developing an Elway-esque fourth-quarter reputation. They've shown a consistent ability to beat elite teams, and they deserve a chance in the top spot."

"The amazing part of Andrew Luck's ability to lead his team to comeback wins is the way it is accepted as the norm now.

"Bringing the Colts back from a 21-3 deficit for a 27-24 win last night against the Texans was the 10th time in two seasons he's led a game-winning drive in the fourth quarter or overtime, so it's almost become commonplace to his teammates.

"I would like to say there was a movie speech or something by him at halftime, but there really wasn't," Colts tight end Coby Fleener said, via Mike Wells of ESPN.com. "He doesn't surprise me. That's the complex answer that I can give. Pretty much there's nothing he does that surprises me."

"Remember when comeback wins came as surprises? With Andrew Luck in control of the Indianapolis Colts' offense, such victories have nearly become the expected outcomes."

"I don't know if there's a tougher QB in the league and one that can make the plays under the duress that he was under and extend plays."