Chuck Pagano said today that the NFL admitted to him that the officials were wrong to reverse a call that the Colts recovered a fumble. That wasn't the only call the officials blew on Sunday night that hurt the Colts, either.

Share All sharing options for: NFL Admits to Colts that Officials Blew Call on Fumble Reversal

Almost anybody with a TV and half-decent eye-sight could see that a fumble call in the Colts vs. Texans game that was ruled to be recovered by the Colts was inconclusive at best.  The NFL agreed, leaving just referee Bill Vinovich as the only person to have thought otherwise.  After video review, Vinovich inexplicably reversed the call, giving the ball back to the Texans.

Colts head coach Chuck Pagano said today that the NFL admitted to him that it was the wrong call.  It doesn't do much now, other than confirm what our eyes already told us: that it was inconclusive, at best.

Here's the situation: the Colts were kicking off after just scoring a field goal, still down 14-3 with just a few minutes left in the first half.  Houston's Keshawn Martin took the kickoff 30 yards to the Texans' 29 yard line, where he was hit by LaVon Brazill.  Brazill forced a fumble, and with the ball on the ground Brazill made an absolutely brilliant play.  Seeing the ball headed towards the sidelines, Brazill dove and hit the ball back away from the sidelines.  According to rules, if any part of Brazill was touching the sidelines while at the same time touching the ball, it meant the ball was dead there.  That wasn't what was called, though, and David Reed recovered the fumble for the Colts, giving them the ball at the 31 yard line.  It was a great play and simply incredible effort from Brazill - and of course, the play was under review, as all turnovers are.  It was clear to all of us, however, that the replay was not clear.  For a call to be overturned, there has to be conclusive evidence that the original call was wrong.  There was no such thing in this instance.  Not at all.  There was no way to tell, and everybody was stunned when Vinovich reversed the call.

That wasn't the only call Vinovich's crew blew on Sunday night, however.  Earlier, with 6:29 left in the first quarter, Pat McAfee was on the field to punt.  Texans' linebacker Bryan Braman came up the middle at McAfee and crushed the Colts' punter, with the officials just assuming that the ball was blocked, meaning that it would have been legal to hit the punter.  The problem was that the eyes said differently.  Sure, you'd assume that when a guy gets that kind of shot at a punter's midsection, it is blocked, but on this play the ball clearly wasn't blocked (you can see that in the image below).  Ok, the officials missed a call in quick time in the spur of the moment - that happens, unfortunately.  It was still a bad call, but what made it infinitely worse was that Chuck Pagano knew that Braman never touched the ball, as did the rest of us watching.  Pagano wanted to challenge it, but the officials told him the play wasn't reviewable.  The problem is that the play is perfectly reviewable according to NFL rules.  An NFL official - the very people that are supposed to know the rules best - told Pagano he couldn't challenge a potentially huge play when in fact he could have.  That is absolutely unacceptable. 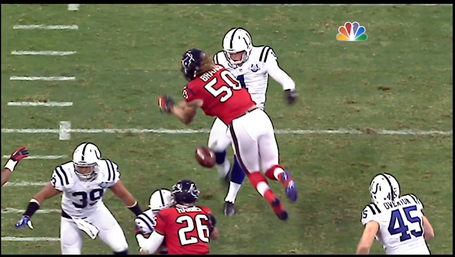 I'm usually very hesitant to place any blame on officials for the outcome of a game.  But, in the event of officiating being so awful that it clearly affects the outcome of a game, we have to address it.  Fortunately, that wasn't the case on Sunday night, but only because the Colts mounted an incredible 18-point rally to beat the Texans 27-24.  Had the Colts lost, things wouldn't be pretty for the NFL or the officials.

The two blown calls were both followed by Texans touchdowns, which means the Colts could legitimately say the officials handed the Texans 14 points in the first half. The Colts ended up coming back and winning the game, and so the bad calls haven't been discussed much this week. But if the Colts' comeback had come up short, those two bad calls would loom very large.

Two times in a single game (single half, even) Bill Vinovich and his crew blew two seemingly obvious calls that cost the Colts two possessions and led to 14 points for the Texans.  That is unacceptable at any level but especially in the NFL.  Thankfully (for many reasons) the Colts won, but that doesn't make these two calls any better.