Every week, Stampede Blue's Josh Wilson will take an in-depth look at Andrew Luck's game from the previous weekend. Today we look at his performance in the thirteenth game against the Cincinnati Bengals.

For much of the past two months, we really haven't seen Andrew Luck be the typical Andrew Luck we are used to. Sure, there have been periods where he has been great, such as the last 15:05 of the game against the Texans or the third quarter against the Titans - but overall, he has struggled as the players around him struggled even more. The line couldn't protect him and the receivers couldn't get open or catch the ball when they did.

On Sunday, the line was the best it has been in a while and the receivers were as good as they have been in a long time. The emergence of Da'Rick Rogers and LaVon Brazill really opened things up for Luck, who completed passes to nine different players in the game and threw four touchdowns, two each to Rogers and Brazill.

Luck had receivers to throw to and they made plays, helping to make it so that he didn't have to do it all himself. And the offensive line - with Joe Reitz as the only new starter - kept Luck clean and sack-free. It was clear that when given more time and a clean pocket, Luck's field vision improved significantly. It wasn't terrible before and it isn't perfect now, but when given time Luck does a very good job at making reads and hitting receivers. The overthrows were decreased and the bad passes were much less than they have been in recent weeks.

Of course, the Colts didn't win. You'd think that if Andrew Luck threw 4 touchdowns in the second half, the Colts would win, but they actually lost 42-28. I'll have some very interesting notes on Luck losing when throwing four touchdowns later in the notes section, but the fact that the Colts lost shouldn't negate the fact that Andrew Luck on Sunday looked like the Andrew Luck that we were used to when we said he was one of the league's best quarterbacks.

Granted, he wasn't perfect, and the first half was still a slow start for the Colts offense. But it wasn't nearly as bad as it has been in some weeks, and the second half for the offense was better than it has been in a while. With Da'Rick Rogers and LaVon Brazill both having great games, the hope is that the offense will continue to produce at this level, and that means that hopefully Andrew Luck will continue to have great games like this. Don't let the final score or the fact that the Colts lost fool you: there were positives, and Andrew Luck's play was one of the biggest ones. 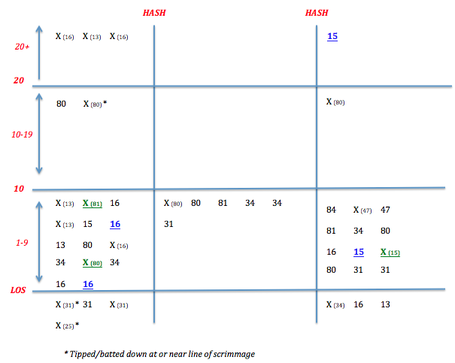