Colts Tried Something Different Sunday Against The Texans: The Shotgun Formation

Offensive coordinator Pep Hamilton got aggressive Sunday against the Texans. It paid off.

Share All sharing options for: Colts Tried Something Different Sunday Against The Texans: The Shotgun Formation

For the first time in 12 weeks, the Indianapolis Colts scored a touchdown on their opening drive.

To prevent their Week 15 meeting with the Texans from starting as so many of their other games have this year, the Colts and offensive coordinator Pep Hamilton finally tried something different. After weeks of attempting to establish the power running identity that head coach Chuck Pagano seems to desire so desperately, Hamilton ditched the slow, often futile two tight end snore fest and opted to spread things out.

The result: 11 plays, 80 yards, and a 14-yard touchdown pass from Andrew Luck to Griff Whalen on the opening drive.

It was the first opening drive touchdown since Week 3 against the 49ers, a game that seems like it was played 15,000 years ago. Back when cave men were painting Buffalo hunts on walls and the Colts had something that resembled a team identity.

Hamilton also added the wrinkle of starting the game with a no-huddle attack, increasing the tempo and keeping the Texans guessing. Luck was 3-5 on the opening drive. One missed throw was a bad drop courtesy of Da'Rick Rogers. The other miss was an overthrow on 2nd and 3 from the Indy 27. Luck's target, Whalen, had beaten his man going towards the sideline. Luck simply overthrew him.

Still, opening the game in the gun produced a rare first quarter touchdown by these Colts, but it wasn't simply done by flinging the football everywhere. 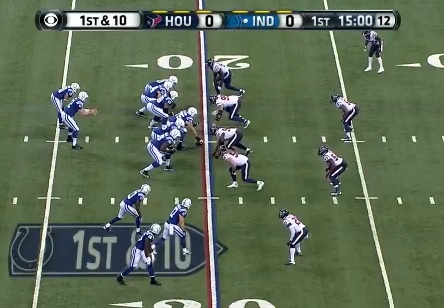 First play (above): Luck is in the gun with 3 WRs bunched to the right. It's a screen to T.Y. Hilton, who gains 7 yards. 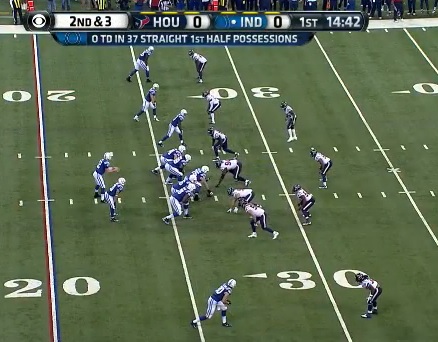 Second play (above): 4 WRs, with tight end Coby Fleener split wide right and Whalen in the slot. This is the play Luck overthrows Whalen on. It would have been a 25-yarder had Luck's throw been better. 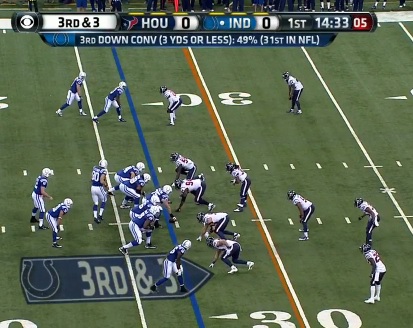 Third play (above): This is still 4 WRs as Fleener goes in motion. Hilton is in the slot and Luck hits him for an 8-yard gain just outside the left hash mark. First down. Colts continue with no-huddle attack. 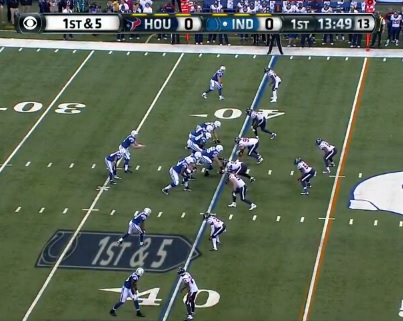 Fourth play (above): The Colts run out of this formation. Brown is given the handoff, makes one move, and then explodes for a 26-yard gain. This is effective running that's produced solely because the Colts are spreading out the Texans' front. This is anything but "power running." 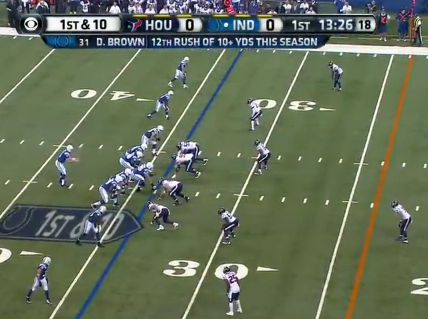 Fifth play (above): Empty backfield, 5 WRs. Luck throws outside to Rogers, who is lined up at the bottom of this screenshot. Rogers drops what should have been an 8-yard gain. The sixth play has Luck back to 3 WRs, shotgun formation, and Brown in the backfield with him. They run from this formation and gained 4 yards. A Houston penalty on 3rd and 6 gave Indy 5 yards, setting up... 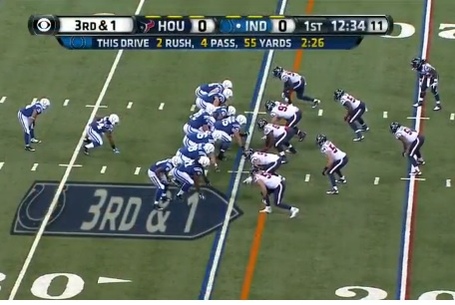 Seventh play (above): This is the first non-shotgun formation of the drive. Power formation. Extra offensive lineman. 2 tight ends. It screams "WE AREN'T THROWING THE BALL!" Personally, it's a formation I hate. Trent Richardson is operating as the fullback, which is another stupid idea I don't want to waste your time explaining. Luck gives a quick handoff to Richardson, who runs off-tackle left. He is met immediately, and after re-watching the play several times, I don't think he converted. The referees gave the Colts a generous spot, and it's first down. 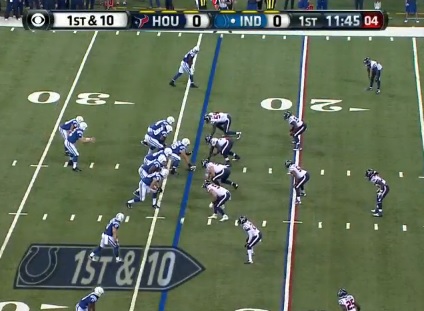 Eighth play (above): YAY! We're back to shotgun, 3 WRs. The Colts run Brown out of this formation as they'd done previously on this drive. He gains 7 yards. 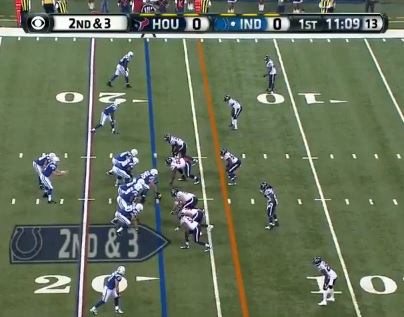 Ninth play: Once again, another run out of shotgun. This time, the Texans finally stop it. Brown only gets 2 yards. the 10th play of the drive has the Colts in a power formation, just like play No. 7. Richardson gets the handoff and barely converts the down. 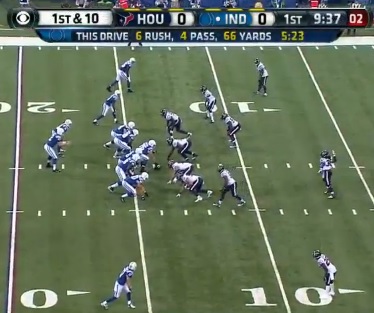 Eleventh play: This is the touchdown. The Houston safety (far right) gives no help to the corner covering Whalen (bottom of the screen). The safety covers Coby Fleener over the middle. Whalen makes a moves, runs a slant, and Luck hits him with a 12-yarder. Touchdown.

To provide you with a sampling of just how different this series was from the opening drives of previous weeks, allow me to show you how Indy opened the last 6 games in which they went 3-3, with the three loses being blowouts. 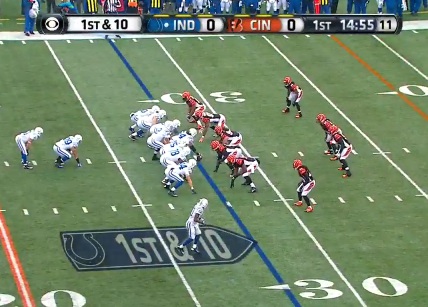 Power running formation. 2 TEs, one WR, and a fullback in the I formation. The Colts go three-and-out to start the game. They fall behind 14-0 at halftime. The offense doesn't get going until the second half when (you guessed it) Hamilton starts spreading Cincy out and abandons the power running.

Home against the Titans: 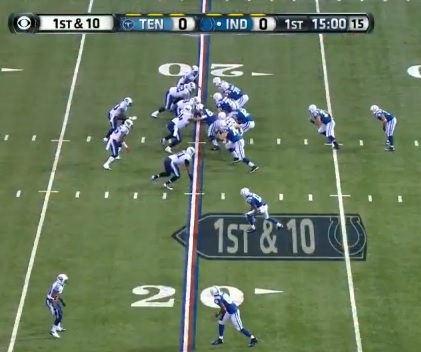 I formation with 2 WRs. You can run or throw out of this, but it's typically a run formation. The Colts didn't run the football with success on this drive. Luck was picked off by Bernard Pollard on 3rd and 8 from Indy's 22. Fortunately for the Colts, Ryan Fitzpatrick is a terrible quarterback. The Colts entered halftime up 12-7. 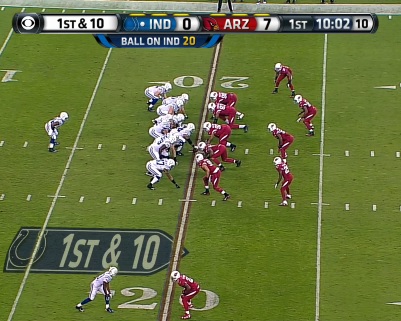 Power run formation. One WR, 2 TEs and an extra OL. The Colts go three-and-out on the opening drive. Their offense never got going throughout the entire game.

On the road against the Titans: 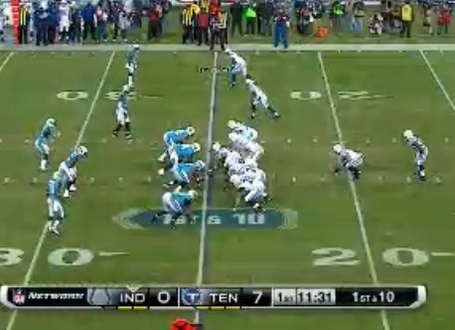 Again, they start in a power run formation. I formation with a fullback. 2 WRs. The Colts ran out of this formation and got one yard. They went three-and-out on the drive and entered halftime down 17-3.

At home vs. the Rams: 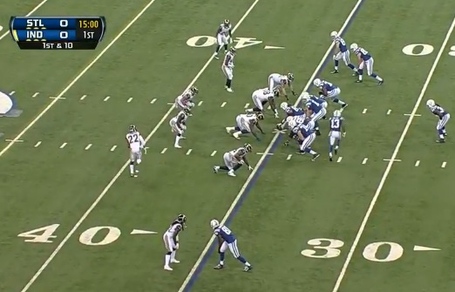 Against the Rams, they spread things out a bit and they have some early success. The offense managed to get to the Rams' 39-yard line. However, Luck wasn't in the shotgun much on this drive. Why he wasn't in the gun against a front as quick and as relentless as the Rams, I don't know. On the 6th play of the drive, Luck dropped back and was hit from behind by Robert Quinn. Luck fumbled. Chris Long scooped up the fumble and returned it 45 yards for a touchdown. The game effectively ended there, and Indy lost 38-8. The worst home loss in 20 years. 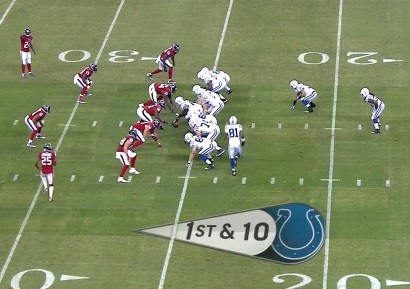 Power run formation. However, to spice things up, Hamilton called a play action bootleg from this formation. Luck threw to the other side of the field and hit Coby Fleener, who rumbled 44 yards. The very next play, the Colts are in a power running formation on 1st down. Luck throws incomplete to Fleener off play action from this formation. Next down, same power running formation, but this time the Colts run Richardson for one yard. One 3rd and 9, the Colts go spread with Luck in the gun, 5 WRs. Luck's pass is incomplete. Drive stalls, and Adam Vinatieri kicks a field goal.

If you go back even further, you can't find a game until Week 5 where the Colts opened the game by spreading the opponent out and throwing the ball from the shotgun. 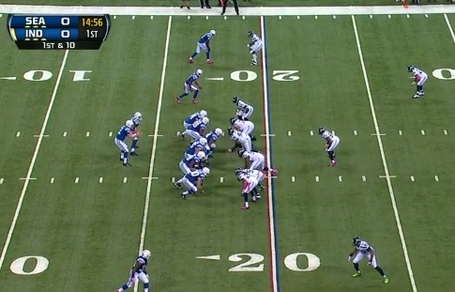 Now, obviously, starting every game in the shotgun and spreading everyone out is not the way Indy needs to start every game. However, it seems that utilizing three or more receivers and spreading the opponent out is something Hamilton should do more of. The reality is that, despite what Pagano may or may not want, the Colts do not have the personnel to be a power running team. They can utilize all the additional tight ends and extra linemen they want. In the end, this philosophy bogs down the offense and makes it predictable.

Trent Richardson had a great quote on this very topic following the win at home against the Texans:

"I love when we spread the field, ain’t that many in the box," Richardson said. "When they do open it up like that, I take advantage of it. I don’t feel like no one man is going to take me down. I make the first defender miss, try to make the safety miss and I’m going to try to make a big collision at the end."

Richardson had his best game as a Colts running back this past Sunday, earning 102 total yards and a touchdown reception, including 64 rushing yards. Most of his rushing damage was done in the fourth quarter (7 carries, 51 yards) when the Colts ran effectively out of the shotgun formation, just as they'd done earlier in the game with Donald Brown.

Power running is an offense for a bygone era of football. It's also not one which suits the best players currently on this Colts squad. Hopefully, Hamilton and, perhaps, Pagano will learn from Sunday win and utilize these spread formations more.