Colts wide receiver Darrius Heyward-Bey had another drop on Sunday.  Unlike the past several this season, however, this one helped the team.

On consecutive punts in the fourth quarter, DHB dropped Chiefs returner Dexter McCluster for a two yard loss on the return, and then the next series he downed a Pat McAfee punt at the 6 yard line.

Yes, this is the same DHB that general manager Ryan Grigson signed this offseason to a 1-year, $2.5 million deal to be the team's number two receiver and starter opposite of Reggie Wayne.

It's easy to criticize DHB this season, as he hasn't been good at all.  Despite starting 11 of the team's first 12 games, he has caught just 29 passes all season (on 62 targets) for just 309 yards (10.7 yards per catch) and only 1 touchdown.  Even when you add in the fact that he has rushed 3 times for 26 yards, he has only averaged 22.3 yards per game.  His numerous drops have made his season an absolute disaster and he has hurt the team far more than he has helped it.

As I said, there's plenty to talk about when talking about how bad DHB has been this year.  But not right now.  No, now, we're actually going to look at an area where he helped the Colts out on Sunday: special teams.

Yes, this is the Colts' $2.5 million starting wide receiver, playing as a gunner on the punt coverage team.  He had a great quote, courtesy of Mike Wells of ESPN, talking about his new role:

"I'm taking it and running with it," Heyward-Bey said. "This is the first time that I've ever been in the playoffs, first time with double-digit wins. I put my ego to the side. I'm all about this team. I think we're a special team. I just want to go out there and help anyway I can."

Ryan Grigson also talked about how DHB is adjusting to his role, per Wells:

"His type of behavior is not real common these days," Grigson said. "Regardless of the circumstances, a former seventh overall pick could have gone the opposite direction and acted like a diva, but that's not Darrius. He has handled everything with such high character, selflessness and grace. Whether it's helping the younger receivers with their assignments, running plays on card team or making plays on special teams, he is doing whatever he can to help us win. He is a true example of what our head coach has preached from day one. All about the team, not self."

Darrius Heyward-Bey was second on the Colts receiving depth chart behind only Reggie Wayne.  Now, even with Wayne on season-ending injured reserve, Heyward-Bey is essentially the Colts' fifth wide receiver - behind T.Y. Hilton, Da'Rick Rogers, LaVon Brazill, and Griff Whalen.  DHB hasn't been thrown to a single time in the last two games combined, but he has found a new role.  It's an odd role for a $2.5 million player who has always played receiver, but he's trying to do whatever it takes to make himself "necessary," as head coach Chuck Pagano would say.

In the past two weeks, DHB has made three nice plays on special teams.  Let's look at them here:

On this play, Griff Whalen caught a punt by Texans punter Sean Lechler and took it back for 51 yards.  It was a great return, but DHB also helped gain a few extra yards by making a nice block.  He didn't really look like he knew exactly what he was doing but he still managed to be the lead blocker for Whalen on the return and clear a guy out of the way at the end to allow Whalen to gain a few more yards.  He has been a very good blocking wide receiver, so the fact that he blocked a guy out of the play shouldn't surprise anyone. 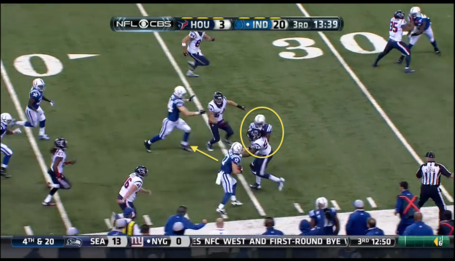 Here, DHB was lined up on the punt coverage unit as a gunner on the right side and he got past the two men on him pretty quickly.  That allowed the WR-turned-special teamer to use his speed to continue to outrun the other two guys, who at this point were trailing him.  When Chiefs return man Dexter McCluster got the ball at the Chiefs 22 yard line following a 56 yard punt by Pat McAfee, Heyward-Bey was right there ready to bring him down, and McCluster couldn't escape him, bringing him down for a two yard loss on the return.  To celebrate, long snapper Matt Overton even gave DHB an elbow to the face (accidentally, of course). 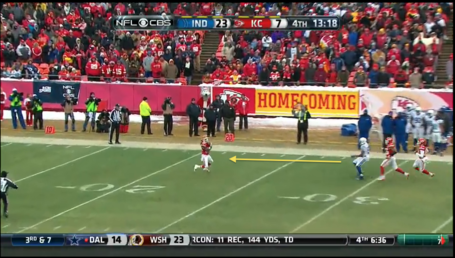 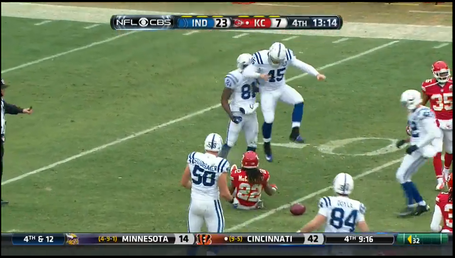 Late in the game, Pat McAfee delivered a PERFECT 39 yard punt that bounced at the Chiefs 5 yard line and started to go backwards.  Darrius Heyward-Bey, still playing gunner, grabbed the ball at the 6 yard line and downed it there, pinning the Chiefs deep in their own territory.  And, to celebrate this one, we got a golf swing from McAfee.  Perfect - just like his punt. 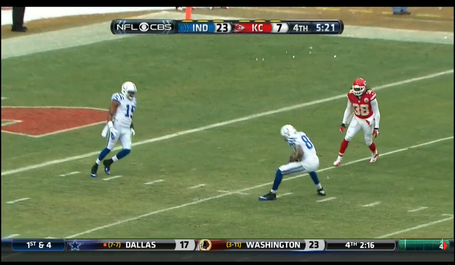 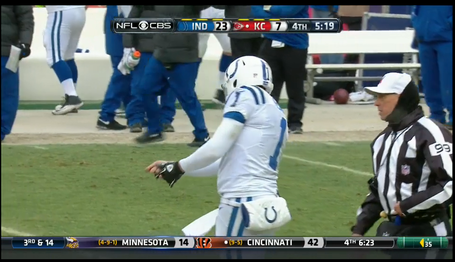 It's easy to criticize Darrius Heyward-Bey for dropping passes or for not contributing much in the passing game.  But it most definitely is really hard to go from starting to being relegated to special teams, but DHB has handled it well.  He's not happy about it, by any means, but that's because he expects more out of himself at receiver.  When it comes to helping the team, he has shown that he will do whatever neccessary.

The Colts have found receivers to step up and replace DHB.  And DHB has done a nice job replacing the injured Sergio Brown.  Regardless of what you will say about Darrius Heyward-Bey at wide receiver, he deserves credit for playing on special teams, and for playing well.