Every week, Stampede Blue's Josh Wilson will take an in-depth look at Andrew Luck's game from the previous weekend. Today we look at his performance in the fifteenth game against the Chiefs.

I know, that's the easiest statement to write that there is when doing an Andrew Luck recap, but it's true. He just keeps improving and keeps impressing. At times this year, he has struggled with overthrowing on some passes and misfiring on some others. He seems to be settling down and that has led to Luck playing very good football recently. In the last three weeks, he has completed 64.35 percent of his passes for 747 yards, 7 touchdowns and only 1 pick for a passer rating of 99.44, all while also adding 66 yards on the ground.

The offensive line has been much more stable and has given him more time to throw, but much more significantly it has calmed Luck down. Before it seemed like he was sensing pressure that wasn't really there because he had become so accustomed to actually being pressured. Now, he has been able to settle down and is on one of the best stretches he has had this entire year.

Chuck Pagano talked about Luck on Monday and how much better he is now, despite several season-ending injuries:

"It's a great question. I guess it just speaks to, we know all the intangibles. We know the tangibles. We know the skill set, all those things. He's one of those guys that is able to stay in the moment, if you will. Regardless of who is out there, he's going to find a way to get the job done. Losing the players that we've lost, especially on offense. You lose Dwayne (Allen). You lose two runners in Vick (Ballard) and Ahmad (Bradshaw) and of course the number one target, Reggie (Wayne) goes down. He's got a lot of faith and a lot of trust in his teammates. Those guys are all accountable. They're accountable to each other. And they stepped up. He's not one to, he's not going to walk in here because we lost this guy, that guy and whatever. He's just one of those guys that's got a great attitude and it doesn't matter what the circumstances are. He's going to find a way to win the football game and he wills his team to win games. He's a great competitor that way. He's got that ‘it' factor."

He definitely does, and Luck is continuing to get better and is settling down now. Just like the rest of the Colts, it appears that Andrew Luck is getting hot at the right time as the playoffs are quickly approaching.

Number of Drives: 11 (not including one drive that consisted of just one kneel down to end the first half)

Number of Plays: 69 (not including three kneel downs) 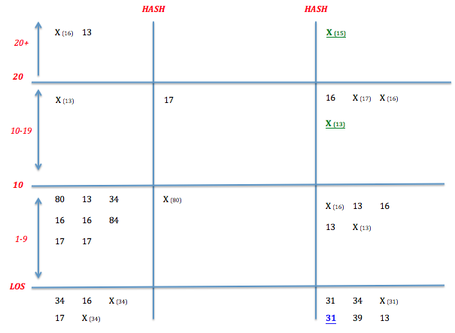 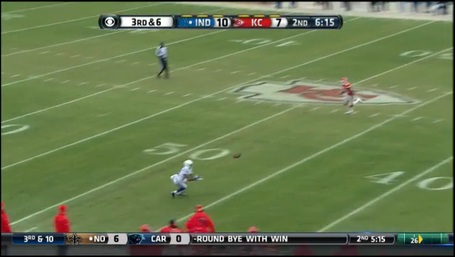 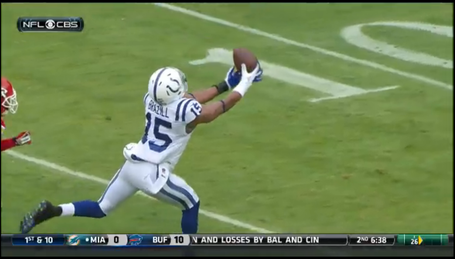