The Colts aren't an aspiring power running football team anymore. Much of their offense is run out of the shotgun with multiple receivers and a dash of no huddle. So far, it's working.

It's safe to say that Colts offensive coordinator Pep Hamilton has found something that clearly works: The shotgun formation.

Yes, that's overly simplifying the reason as to why the Colts' offense has looked so much better in recent weeks, but it's not too far off from the truth.

As we detailed last week, Indianapolis runs an efficient, productive offense out of the shotgun formation, usually with 3 wide receivers; sometimes 4 WRs. Their running game has been especially effective, giving Donald Brown new life this season after he was, essentially, given up on by the Colts front office and coaching staff. Sunday against the Chiefs, Brown continued to gobble up yards and score touchdowns running and catching from the backfield in a shotgun formation.

However, when the Colts have deviated back to the power formations that head coach Chuck Pagano seems to want to cling to, they've had diminished success.

Indianapolis spent 23 of their first 27 plays on offense in the shotgun. 12 of their plays were run with no huddle, including a majority of the plays on Indy's first scoring drive, which ended with a 46-yard field goal by Adam Vinatieri.

Here's how Indianapolis started the day. 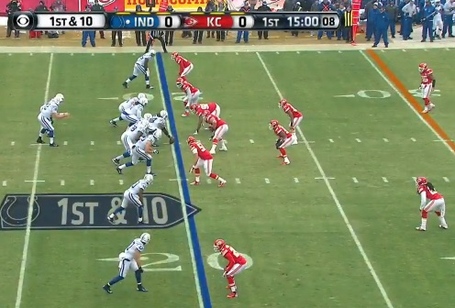 First play (see above): Right off the bat, the Colts are in shotgun just as they were last week against the Texans. This ends up being a screen for Brown, who loses a yard. Chiefs defense simply wasn't fooled. 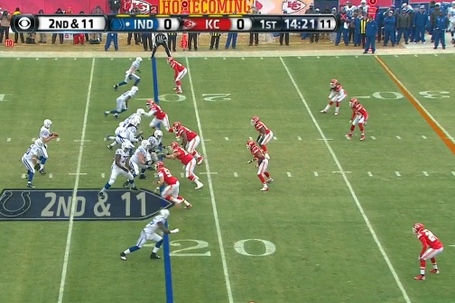 Second play (see above): Shotgun again, only this time the Colts run for this formation, as they've done so effectively all year. And no huddle as well! Colts catch the Chiefs off guard and Brown rushes right up the middle for 10 yards, which brings up... 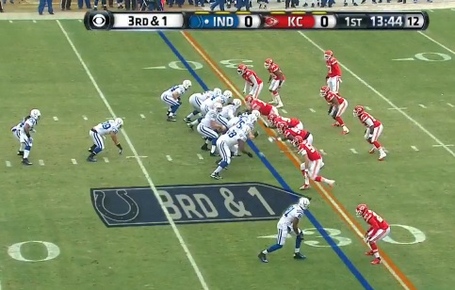 Third play (see above): Barf. This is 3rd and one, and for reasons that will only make you hate Chuck Pagano and his constant memes on how the Colts need to be a "power running team" all the more, the Colts go to a jumbo package. The only WR on the field is Darrius Heyward-Bey, which is a clear sign that the Colts have ZERO intention of throwing the ball. The Chiefs crowd the box and commit everything to the run. Situations like these are ideal for play action, bootlegs, and other plays that pretty much guarantee a down conversion. Instead, Hamilton calls for an inside hand-off to... Stanley Havili? The fullback?

Havili did have a lane open off left tackle, and could have squirted through for a pretty good gain, easily converting the down. Instead, he lowered his head and rammed himself up against center Samson Satele's butt. A jolly image to burn into your mind, I'm sure. Satele, who was pushed into the backfield, could not give Havili any lane to run through. The play got stuffed and the Colts were forced to punt. This was Hamilton's worst call of the entire game. 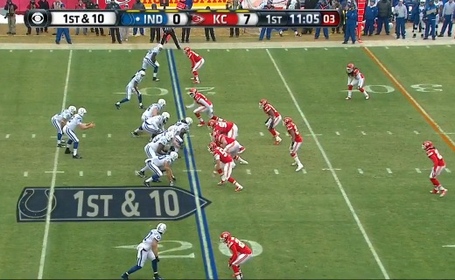 First play (see above): They're back in shotgun, this time with 4 WRs. Another hand-off to Brown nets 2 yards. The second play of the series features the shotgun again! No huddle again! 3 WRs this time. Luck does about 500 pump fakes before throwing incomplete to tight end Coby Fleener. Protection by the offensive line on this play is excellent. No Chiefs pass rusher even breathes hard on Luck. Third play: Shotgun once again! However, the Colts huddle. Luck throws to Fleener, who catches the ball but fumbles it out-of-bounds before he can make the first down. Colts forced to punt again.

Side note: Coby Fleener was terrible Sunday against the Chiefs, both receiving and blocking. 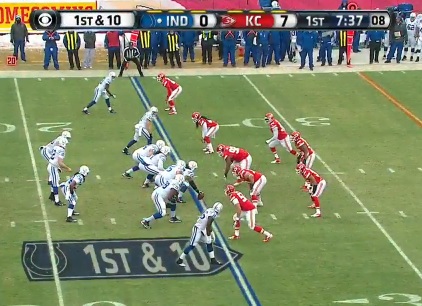 First play (see above): OK, now the Colts finally get something going after going 3-and-out on their first two possessions. For 7 of the 12 snaps on this drive, the Colts also utilized no huddle. This first play is another 3 WR set. Luck hits Fleener for a 2 yard gain. Second play, the Colts shift again to no huddle. This caught the CBS TV crew off guard and the camera does not cutback in time to show the pre-snap formation. The play is a designed bootleg to the right. Luck throws to T.Y. Hilton for 6 yards 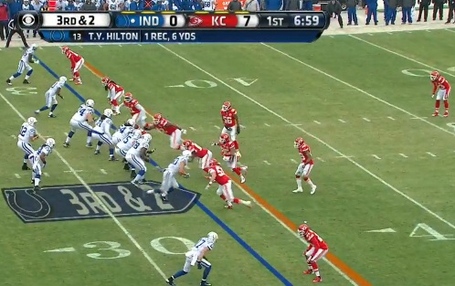 Third play (see above): It's 3rd and 2, but the Colts are again in shotgun. Luck hits Whalen on a slant for a 8 yard gain. First down. This is the first third down conversion of the Colts for the Colts, and it comes on 3rd and 2 out of a shotgun formation. 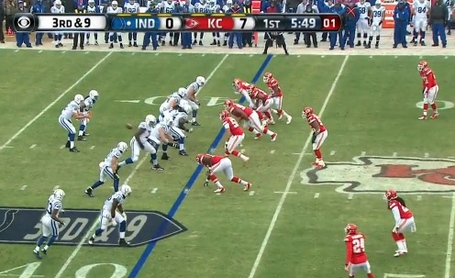 Sixth play (see above): Plays four and five result in nothing. Poor blocking by Fleener on play four results in Trent Richardson getting tackled in the backfield. Play five is a deep throw to Rogers that falls incomplete. The sixth play is third and long. Shotgun again with 3 WRs bunched. Luck hits Rogers for a 17-yard gain. 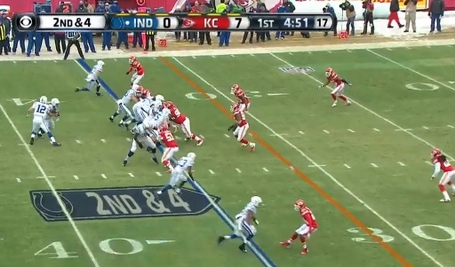 Eighth play (see above): The Seventh play had Luck hit Hilton for a 7-yard gain. On play No. 8, once again, the Colts try to run from the shotgun formation. Once again, Fleener blows a a block and Richardson is tackled in the backfield. Plays like these are common when Fleener is blocking, and they should highlight how Richardson's poor rushing totals in 2013 are not necessarily his fault. 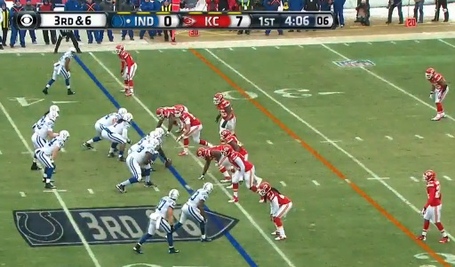 Ninth play (see above): Shotgun with 3 WRs again. Richardson runs a route out of backfield. Luck hits him for 5 yards. However, a horse collar tackle by Chiefs linebacker Derrick Johnson gives the Colts 15 more yards.

The drive stalls inside the redzone on play No. 12, which started as another shotgun, 3 WR formation. On 3rd and 9, Luck throws right expecting Rogers to break off his route. However, the rookie receiver doesn’t and the pass is almost picked at the 2 yard line. Adam Vintatieri then misses a 34-yard FG. Despite the miss, this is the best the Colts offense had looked up to this point in the game, and a big reason why is Hamilton ran everything from the shotgun.

The 4th series is when the Colts finally score. Hamilton mixed in more I formations, but they did little to move the offense. 6 of the series' 9 plays were run out of the shotgun. The drive stalls in KC territory, and this time Vinatieri converts on a 46-yard FG.

The series the broke KC's back was Indy's 5th. After the Vinatieri FG, the score was 7-3. On the next series, Chiefs running back Kniles Davis, who was in the game because Jamaal Charles needed a breather, fumbled and the Colts recovered the ball at the KC 33. On the second play of Indy's 5th series, out of a shotgun, 3 WR formation, Donald Brown feigns a block and slips out of the backfield. NO ONE on the KC side accounts for him. Luck finds him, tosses him the rock, and Brown does the rest. He scampers 33 yards for the touchdown. 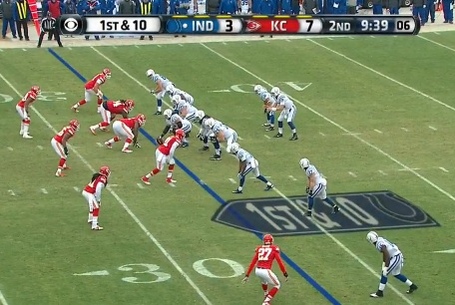 As you can see, the 3 WR, shotgun look is now the staple of this offense, not 2 TE power running. Take this as an adjustment that should breed optimism. The Colts are simply not good enough to run the kind of offense Chuck Pagano wants. They aren't physical at the point of attack, and power run formations are, quite frankly, a wasted down. Thus, Pep Hamilton has made adjustments, and they're working. It's not "power football," and it doesn't need to be. With a lot of finesse running and multiple wide receivers, the Colts managed to walk into Arrowhead and dominate the Chiefs in a critical late-December game.