With the Colts inking safety LaRon Landry, the focus now shifts to shoring up their defensive line.

The Colts and general manager Ryan Grigson continue to spend on under-the-radar players in free agency. Though the biggest "name" player they've inked so far is former Jets safety LaRon Landry, everyone else they've brought in fits the mold of solid, productive players rather than "dream team" stars.

A player who fits the "solid-productive" mold is 49ers defensive tackle Ricky Jean-Francois. Prior to Wednesday evening, several sources had Jean-Francois linked to the Colts. He spent part of Wednesday in Philadelphia being courted by Howie Roseman and Chip Kelly. He did not sign there though, and within a few hours was off to Indianapolis for a visit. He arrived at the Colts facility late last night, per a tweet from the Colts official twitter handle.

They even have a picture of Jean-Francois walking in the building. Doesn't he just look soooooooooooooooo happy to be in Indy? 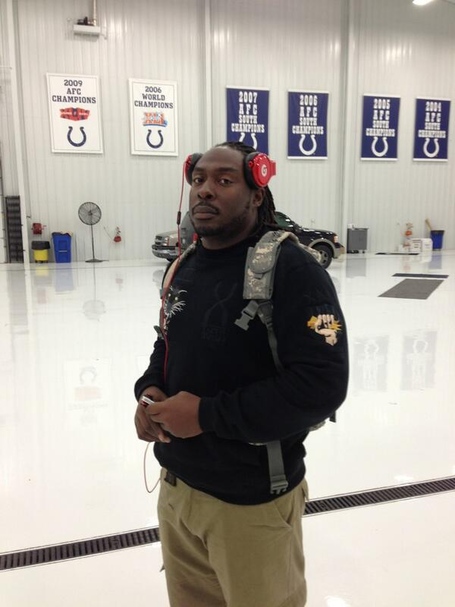 In fairness to Jean-Francois, if I kind of have that look when I've spent the better part of my day in airplanes.

Based on what we know, Jean-Francois has not left Indianapolis. The expectation is that he will sign there as the Colts have reportedly putting on a "full court press" to sign Jean-Francois.

Since being drafted in the 7th round in 2009, Jean-Francois has 34 tackles, 3 sacks, and a forced fumble in his career. He has worked with current Colts defensive coordinator Greg Manusky before. Manusky was the DC in San Francisco back when Jean-Francois was drafted.