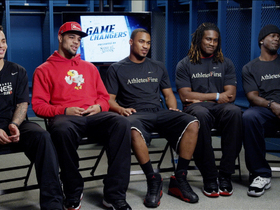 
So last night I was able to watch "Game Changers" on Nfl Network and it was the Wide Receiver edition. They had Steve Mariucci and Michael Irvin in a 30 min show talking to, and working out with 5 draft prospects at the wide receiver position: Kenny Stills, Keenan Allen, Robert Woods, Cordarrelle Patterson, and Da’Rick Rogers. I’m really disappointed they didn’t have Deandre Hopkins as well because I’ve heard so much praise for him on this site. But I took away a lot from the episode about these 5 guys. Essentially, Mooch and Irvin sat these guys down, asked them some of the tough questions about past screw-ups (Stills and Rogers) as well as how they felt about themselves and the image of the "NFL Wide Receiver Diva." After the sit down, they took them out on the field and worked some drills with dummies.

Now, unfortunately, it’s very difficult to get a grasp on talent just from watching a few drills with Michael Irvin (though he did a great job coaching there technique). But it was very easy for me to decide who I wanted wearing the horseshoe next season based on character. Well, let me start with who I do not want:

Cordarrelle Patterson: This kid just seemed very immature and it was clear that he loves the attention and will be another WR diva in the NFL. He said things like "it’s because they are not able to do what I can do." And this is in front of Steve Mariucci and Michael Irvin for cryin’ out loud! Show some respect kid! I know he stands out as a freakish talent with crazy speed and size, but as a first or second rounder, I’m not taking him. The kid is attention-thirsty and we don’t want that in our locker room. (Though I would have faith in Mr. Luck to shut him up)

Da’Rick Rogers: We’ve all heard the expression, "Fool Me Once…" well this kid was charged with disorderly conduct and resisting arrest outside a bar in July, before his true freshman season even began! Then he failed THREE drug tests at Tennessee. He eventually had to transfer because he was suspended indefinitely. He also seemed to have a bit of a "look at me" mentality during the show. I’ve read several reports of his previous coaches, even at Tenn Tech, not liking his attitude. He was obviously the strongest of the group, but with that he seemed a bit slow off the line. I’ve heard he is a bit of a wild card and could possibly fall to the 3rd-4th round. If he falls to the Colts in round 4, I won’t be too disappointed, but if they take him in round 3, I’d be upset.

The other three guys I wouldn’t hate to see in a Colts uniform.

Kenny Stills: He got in trouble once for a DUI, but who hasn’t? He also had a great response when asked about it and I truly believed that he will never do it again. While he did have a few moments where he seemed to like the attention he seemed very genuine in his answer about his mistake. He talked about how it was very embarrassing for himself, his school, and his family. He hated to let them down and he did not want to pay the fine (haha). He assured his family that he would never put himself in that situation again. He also has decent speed and hands. . One thing that stood out as well was that he was working out doing MMA. This says to me that the kid is willing to work hard and stay in physical shape. He is my 3rd choice.

Kenaan Allen: The biggest concern with Allen is his injury. He still was not able to work out, so there wasn’t much to be seen physically (though he didn’t throw too poorly). He seemed fairly courteous until he stated that he would be the best WR in the NFL from day 1. I’m really hoping that this was a sarcastic joke. Other than that, without watching it again, he didn’t really stand out too much either way. The only reason I’m putting him at #2 for me is because I’ve read so much about him being a very, very good talent who is 6-3 and can be…well a game changer.

Robert Woods: As much as it pains me to say it (I am a huge Irish fan who hates USC with a passion) Robert Woods is my guy. It’s amazing how much this guy reminds me of Reggie. He doesn’t have crazy speed (4.51) or height (6-1) but it was very clear to me that he was the smartest, most mature, and most humble of the group. When Irvin asked him technical questions about how to respond to what a DB does, he nailed it every time. In fact, it seemed Irvin favored him (when asking questions on the field) because he knew he would get the right answer and he didn’t want to put the other guys on the spot. When questions were posed to the entire group, he was not the first one to speak up and he only bragged once (224 yds against Richard Sherman his freshman year….yikes) and this was because someone asked him how he faired in that game. He was the only one of the group to talk about blocking as something he can bring to the table, and he even stated that he tries to model his game after Reggie. The kid was great off the line (according to Irvin) and he also talked about his route tree being something he likes to hang his hat on. The final great thing about this guy is that he is supposedly going to fall to the second round and will certainly be there at #24. As a Colts fan, my vote is to trade down to maybe #5-#10 in the second and take this kid.

Anyone else see it? Thoughts? Anything I screwed up? I only saw it once with a couple bourbons so please go easy on me.