In the debut of the Free Agent Film Study series, we look at Paul Kruger of the Baltimore Ravens. Using the All-22 film, I look at games Kruger played in this season. Is he a fit for the Colts?

Paul Kruger recently just won the Super Bowl with the Baltimore Ravens, but could he be on his way to Indianapolis come free agency? Kruger finished the season with 42 tackles, 9 sacks, and one interception. In the postseason, he had 14 tackles and 4.5 sacks.

I watched a total of 11 games for Kruger. You could see him at times be an All-Pro-like player, but then go invisible for almost a whole game. Should the Colts go after Kruger once free agency kicks off on March 12? Let's see what the film tells us about him in the categories of run defense, pass coverage/zone spy, and pass rushing abilities.

This is the weak spot in his game. It looks like his job is to set the edge in Dean Peas' 3-4 defense, not go after the ball carrier a lot. All too often though, you see Kruger get pushed off his edge or make the wrong read and open a huge hole for running back to run through.

As shown below against the Cowboys, Kruger gets faked out by Jason Witten. This causes him to drop back a few steps thinking a pass play is coming, but Witten is just leading Felix Jones for a easy touchdown. Kruger then has to maneuver back into his spot to try and regain leverage, but it is way too late.

GIF via assets.sbnation.com/Baltimore Beat Down

Against Washington, Kruger shows a positive in his edge-setting ability. The option was key for the Redskins with a quarterback like Robert Griffin III, but Kruger was keen on putting a muzzle on some reads. 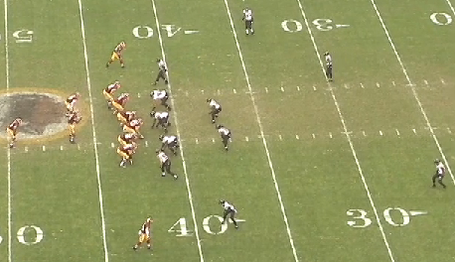 Griffin III is lined up in the pistol offense with Fred Davis and Alfred Morris alongside him. The play is a reverse to wide receiver, Josh Morgan. Kruger is in a stand up position on top of the right tackle (#99 in white). 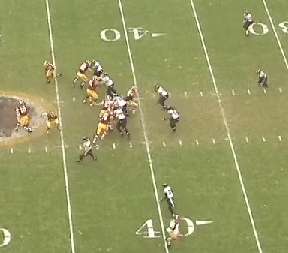 The play starts developing with Morgan running toward Griffin III with a handoff. Fred Davis' job is to go across and keep Kruger from getting in on the play. Paul is already getting near the play before Davis gets there. He slows down as you see above, as this means he will be setting the edge to make Morgan cut back inside. 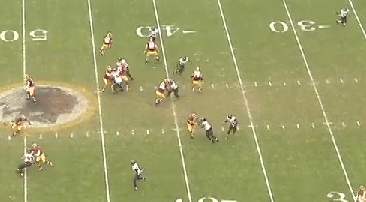 As Morgan gets the handoff, Kruger sets the edge by forcing Morgan back inside the hash marks. This forces Morgan to lose some speed and cut back into two to three Ravens waiting for him. Morgan is tackled eventually by Corey Graham for a gain of three yards.

On this play against the Colts in the wildcard round, Kruger flows to the ball on the opposite side of the hash marks and makes the tackle. 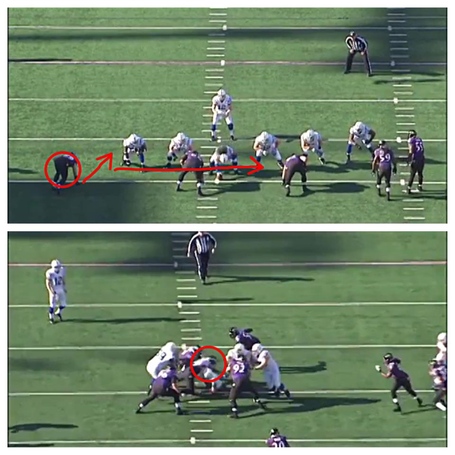 Luck threw a screen play to Donnie Avery on the opposite side of Paul. He notices it right after he makes contact with Justice. He releases off of him and flows to the ball to make the tackle on Avery.

Kruger has the tendency of blowing contain on run plays as shown above against the Cowboys, but he is strong at the point of attack. Paul is also good at shedding blocks with his powerful hands and being disruptive when the run comes to his side. Surprisingly, a lot of teams ran away from Kruger. I guess they feared his edge-setting prowess.

If teams are pursuing Kruger for his ability to stop the run, they are looking at a backup. Once we get into his pass-rushing ability though, he looks like he earns the money he desires.

Kruger is deceptively quick in coverage. He can keep up with running backs and wide receivers for about 10-15 yards. Paul can also play in a spy role on some plays. In the games I watched, Kruger dropped into coverage around 60+ times. Baltimore used him a lot to defend backs on wheel routes and tight ends on intermediate routes. His 6'4", 270 pound frame makes windows smaller for the quarterback to throw in. On coverage in space, Kruger tends to get exposed to mismatches on small, quick receivers. 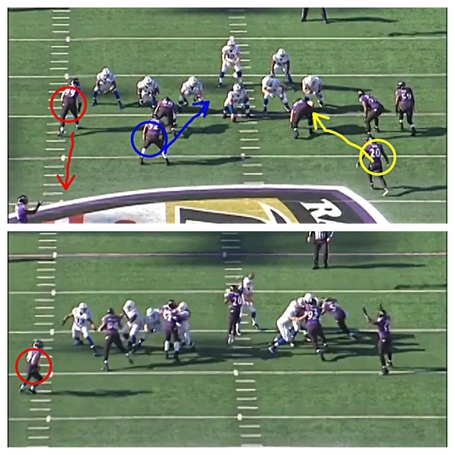 Above, Kruger drops back about 5 yards to open holes for Ray Lewis and Ed Reed to blitz into against the Colts. Winston Justice is expecting Kruger to use an outside pass-rush move on him, but is surprised to see him drop back. Lewis then shoots into the gap between Mike McGlynn and Samson Satele, opening up a massive hole in the A-gap. Reed then bolts through the opening and gets pressure right in the face of Andrew Luck. This causes an incomplete pass on the play. Without Kruger dropping back, this play would not have had the same effectiveness without going into a spy coverage. 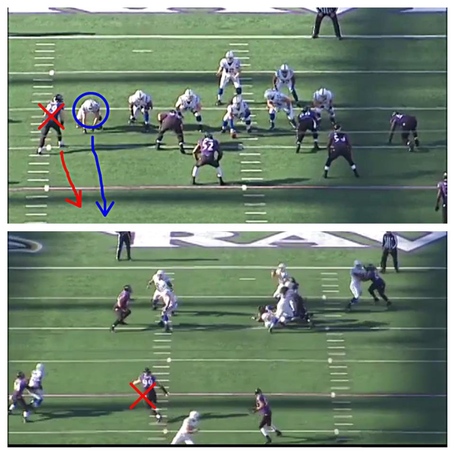 Kruger is given the responsibility of covering Coby Fleener down field on a post route. He plays man-to-man coverage on Fleener and he shows keen awareness on this play as well. One he sees Reggie Wayne cutting across the middle of the field, he switches over to Wayne. This read forces Luck to tuck it and run for a short gain.

No team would want to put Kruger in coverage all the time, but he at least shows the ability to cover once in awhile. Baltimore utilized his versatility and if the Colts signed him, expect Chuck Pagano to do the same.

Remember this, Kruger is not a number one pass-rusher. He is better suited as a complementary piece to the main player (such as Terrell Suggs and possibly Robert Mathis). In the first 7-8 weeks of the season, you rarely saw flashes of a sack artist. From then on though, he turned it up once Suggs came back from injury. As Colts fans, we all know what Kruger did to them in the wildcard round. He earned his money in the playoffs, as his stock soared.

Kruger uses a lot of combo moves to get to the quarterback. In the games I saw he used a lot of dip/rip, bull rush, and a swim/hesitation move the most. With less attention on him, he shined in one-on-one situations. Check out what Paul did to Dwayne Allen below. 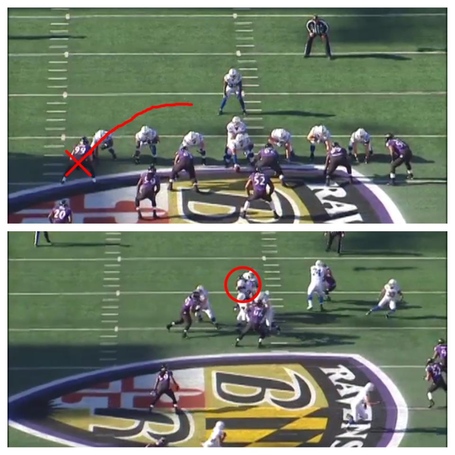 Against Allen, Kruger used a bull rush on his outside shoulder to get to Luck. He simply overpowered Allen into Luck to get the sack. When a team puts a tight end on Kruger in a pass-rushing situation, it is usually game over for the tight end. In this game, Kruger pretty much dominated the whole game and the Colts did not have any answer for him. 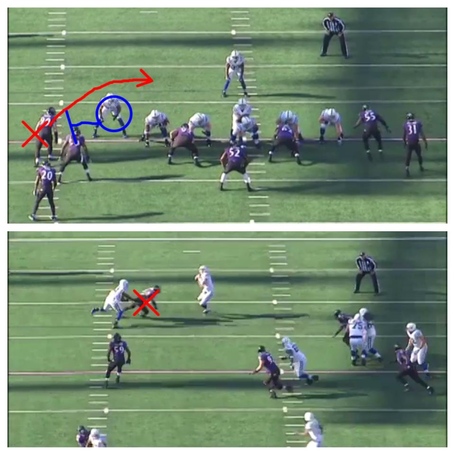 In the play above, Kruger was once again pitted against Allen. He used the same move on Allen (bull rush on Allen's right shoulder) to force Luck to move up in the pocket. The pressure causes Luck to overthrow his receiver deep down field.

Overall, Kruger will not explode past a guy or bull them back into the quarterback that often. He does it methodically, chipping away at the tackle or tight end. Paul uses sheer effort and determination to get to the quarterback. Kruger also swatted down a lot of passes last year. He got close to even more too on a lot of occasions. If he has the number one guy to take pressure off of him, Kruger should shine like he did in the playoffs.

Kruger is capable of putting up double digit sacks any season as a hybrid outside linebacker/defensive end. He would be an every down defender for the Colts if they decide to pursue him, which he should be able to thrive in opposite Mathis.

In the first half of the season, Kruger left me thinking he is not worth the money he wants on the free agent market ($40 million). The second half of the season though, he shined opposite Suggs. Kruger is not the kind of player you should build your whole defense around though; I think he is more of a complementary player.

If I were to try and infiltrate the mind of Ryan Grigson, I think he will call up Kruger's agent once March 9 hits (negotiating with teams opens). Kruger would come in and fill the void left by Dwight Freeney, who did not fit the 3-4 defense. With the Chuck Pagano connection, that obviously makes him a fit too for the Colts. Indianapolis should not pay Kruger as much as he wants, unless Anthony Spencer get signed quickly by someone else.

Other teams beside the Colts that could make a run at Kruger are the Browns, Bills, and a wildcard team like the Saints could make it a possible fit.

What do you guys think, should the Colts pursue Kruger once free agency starts?