As we noted in today's Luke Links (again, thanks to Radcolt for posting in the FanPosts section), Sean Ceglinsky snapped this photo of Colts head coach Chuck Pagano at USC's Pro Day: 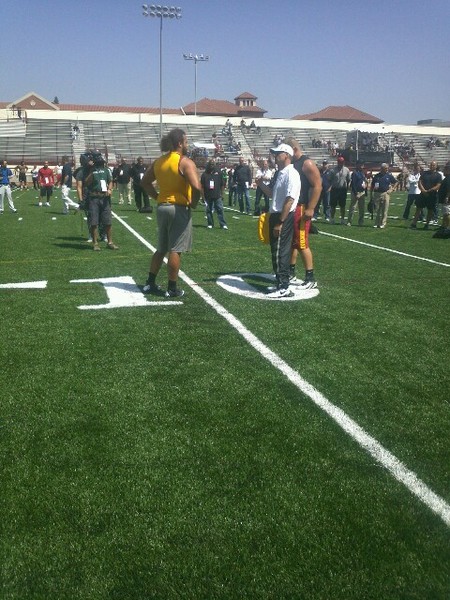 The big guy Pagano is talking to seems to be Khaled Holmes, a player many regard as the best center in a 2013 draft class that is extremely light on quality players at that position. Holmes is viewed as a potential third round pick.

Like the player he snaps to, Holmes came into the 2012 season more highly regarded than he is now. His stock could rebound in the postseason. Scouts can’t figure out if his play has declined because of an ankle sprain or because he isn’t athletic enough. But more than one has used the word "disappointing" to describe Holmes this year. Holmes overextends at times and is inconsistent. He has good size and plays with power. He uses his hands well and takes good angles. Holmes is scrappy. He also could be considered at guard.

It's worth noting that Colts G.M. Ryan Grigson is on record saying he feels more comfortable bringing in a young corner to play rather than a rookie offensive lineman. Last year, he drafted only one offensive lineman (Justin Anderson out of Georgia) and he did so in the seventh round.

However, also on record is Colts owner Jim Irsay, and his comments about the play of the offensive line in 2012 were not encouraging if you are named Jeff Linkenbach, Samson Satele, or Joe Reitz. Holmes might be better suited as a guard, but if he is drafted, you have to wonder if keeping Satele makes sense. Satele was out-played last season (for the most part) by A.Q. Shipley. If Holmes is added into the fold, and if Shipley continues to out-play Satele, why retain Satele?