Chandler Harnish And Matt Hasselbeck Wager Over Who Gets To Wear No. 8 For Colts

Hasselbeck bet Harnish $8K that he couldn't make a half-court shot. See how it played out here.

Share All sharing options for: Chandler Harnish And Matt Hasselbeck Wager Over Who Gets To Wear No. 8 For Colts

New Indianapolis Colts quarterback Matt Hasselbeck has worn the No. 8 for twelve seasons. However, 2012's "Mr. Irrelevant" draft selection for the Colts, quarterback Chandler Harnish, also wears No. 8. In fact, he's so attached the the number, he uses it in his Twitter handle: @CHarnish8.

When it came time for Hasselbeck to pick a number, he seemed resigned to going back to No. 11, which he wore his first two seasons in the NFL when he was a back-up in Green Bay behind Brett Favre. Going back to No. 11 seemed appropriate now seeing as Hasselback's stint in Indianapolis is primarily to back-up Andrew Luck.

However, rather than just allowing Harnish to keep the number, Hasselbeck set-up a wager.

Harnish is from Bluffton, Indiana. Apparently, he is into this thing we Hoosiers are known for liking, called "basketball." Hasselbeck wagered Harnish that if he could hit a half-court shot, then Hasselbeck would give Harnish $8,000 while Harnish surrendered his No. 8 to Hasselbeck. If Harnish missed, he kept his No. 8, but was denied the money.

How did this play out? Here you go:

From the angle, it seemed as if Harnish's foot was on the line, but since Hasselbeck was staring right at his feet when he shot the ball, I don't think it matters much. 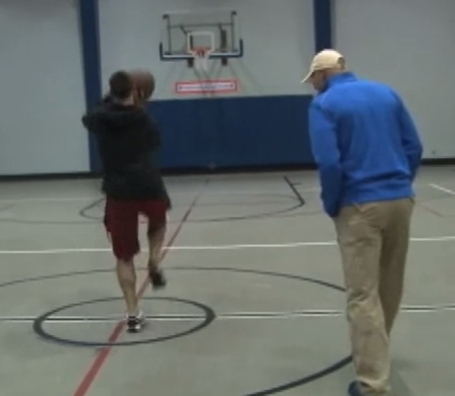 Harnish drilled the shot. Hassebeck is No. 8. Harnish is No. 5 and $8K richer. [UPDATE: Harnish asked Hassselbeck to donate the $8K to charity. Classy move.]

We discussed last month how Harnish's relationship with Hasselbeck would be a critical part of Harnish's development as a quarterback. Fun activities like this wager and trick shot are a very good start.