We've compiled some early observations of the 2013 Colts rookie minicamp.

These observations of the 2013 rookie class come to us from our friends George Bremer of the Anderson Herald Bulletin and Tom James of the Terre Haute Tribune Star.

Werner said he's always used the 4-point stance. Helps him stay low, and he'll continue with it as long as coaches allow. #Colts

One personal observation on Werner, he gets down low in a 4-point stance and resembles Miami's Cameron Wake on takeoff. #Colts

From George's camp notebook article, which is well worth your time:

One thing that might stand out initially for many fans is Werner’s stance.

When he lines up tight to the line of scrimmage as a defensive end in four-man fronts, he eschews the three-point stance favored by many NFL pass rushers in favor of a four-point stance with both hands in the ground.

It’s a technique Werner said helps him to stay low when he comes off the ball, and it makes him feel comfortable. It also makes the German native resemble Miami Dolphins all-pro pass rusher Cameron Wake, who has used a similar four-point stance to terrorize quarterbacks with 43 sacks in four NFL seasons.

Werner said he’ll continue to employ the unique stance as long as the coaching staff is OK with it.

Tom James gives us his observations on some of the other players at minicamp:

QB Clay Belton from Findlay has good size. And he is a lefty.

Belton is one of 13 tryout players participating in rookie camp.

TE justice Cunningham showing he has some pretty good hands as a receiver. Just hauled in a long pass from Belton on crossing pattern.

PK/P Brandon McManus has a string leg in his field goal attempts. Ball jumps off his leg.

Boyett was held out of drills and probably won't do much on field work in rookie camp. They hope to have him ready for OTAs.

And finally, George was kind enough to tweet out an image of the media guide listing all 13 of the tryout players the Colts have in camp. Note that two of them are quarterbacks: 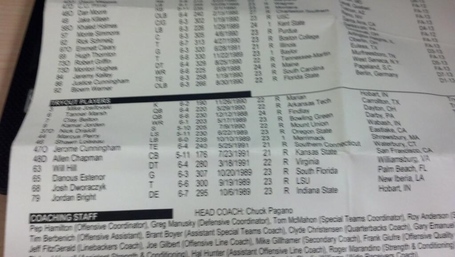