Every week, Stampede Blue's Josh Wilson will take an in-depth look at Andrew Luck's game from the previous weekend. Today we look at his performance in the third game against the San Francisco 49ers.

Last week, I wrote about how the Colts were totally, utterly dependent on Andrew Luck. So, of course, it makes sense that in one of the toughest games of the entire year for the Colts, they weren't. Figures.

But I'm not complaining, and neither is Luck. He didn't throw for even 200 yards, much less 300. He didn't throw a touchdown. But yet still Colts head coach Chuck Pagano said that he has "never seen him smile the way he was smiling after this one.''

Playing less than an hour from Stanford University, where he played collegiately, and playing against his former head coach at Stanford, Jim Harbaugh (also a former Colts quarterback), Luck's Colts rolled to an incredibly impressive 27-7 victory. The most impressive thing about the game wasn't Luck however - it was the run game rolling over the 49ers defense for 179 yards and 3 scores on 39 carries (some of which was by Luck himself). It was the defense suddenly looking like one of the league's best, shutting down the dangerous Colin Kaepernick. It was the special teams, pinning the 49ers inside the 10 yard line on 3 out of 4 punts (hat tip to punter Pat McAfee).

And behind it all, Andrew Luck was glad to stay behind the scenes. He's all about winning. So what if he didn't put up the stats? His team went to the west coast, played a team that is a Super Bowl contender, and totally dominated the game for 60 minutes. Luck played well, but he was overshadowed by other great performances. And that's incredibly good news for the Colts and their fans.

Luck delivered the score of the game, keeping the ball on a bootleg around the left side for a score to put the game pretty much out of reach for the 49ers. He finished it off with an emphatic spike of the football. It was symbolic of the emphatic statement win the Colts notched over the 49ers.

And while their quarterback played a good game, he was overshadowed by others. And that's about as good of a recipe for success as there is.

Number of Drives: 11 (including a one-play drive that featured a kneel down to end the game) 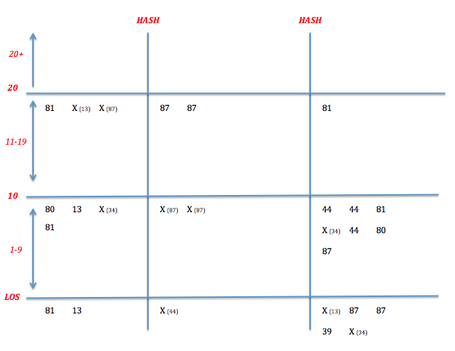 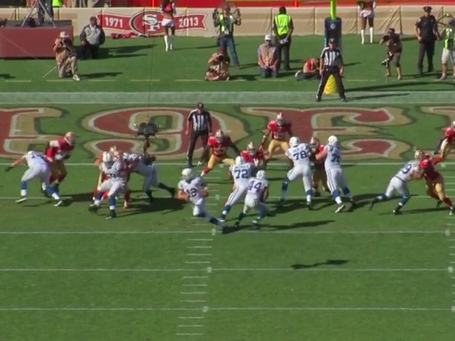 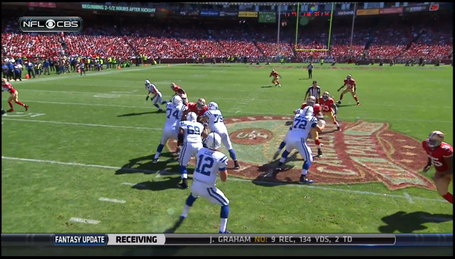 "It's been three years since Jim Harbaugh coached Andrew Luck at Stanford and if for some reason, Harbaugh forgot how good Luck is, he got a nice reminder on Sunday. Luck threw for 164 yards and ran for a touchdown as the Colts rolled over the 49ers 27-7 at Candlestick Park."

"Luck didn't just outrush Kaepernick, 24-20, but he was mentally tougher and sharper, more poised in and out of the pocket. He avoided the mistakes San Francisco's defense tends to force. The Colts' additional offensive attitude carried over to their defense, which smacked around the league's best front and Kaepernick in a package deal."

Colts running back Trent Richardson, on Mike and Mike in the Morning on Monday morning:

"First of all, Andrew is the smartest person I have ever met. He's a rocket scientist. This man has about four or five audibles in one play. He is the man. First pick of the draft and the third pick, it's a blessing."