Every week, Stampede Blue's Josh Wilson will take an in-depth look at Andrew Luck's game from the previous weekend. Today we look at his performance in the sixteenth and final regular season game against the Jaguars.

On his first completion of the game on Sunday against the Jaguars, Andrew Luck racked up 11 yards on a pass to T.Y. Hilton. More significantly, it moved him past Cam Newton for the most passing yards through a player's first two years in NFL history. Luck finished the day with 271 more passing yards after that attempt, bringing his season total to 3,822 yards on the year and 8,196 in his two year career.

It was quite a performance to cap Luck's sophomore regular season, and while statistically it doesn't rank as his best game, it looked like it while watching the game. Luck was on target on almost every pass and the passing attack was working as well as it has all season.

Offensive coordinator put the ball in Luck's hands and he certainly hasn't disappointed. His offense has controlled the ball and have taken care of the football - Luck first and foremost. And the offense is looking very dangerous entering the playoffs. Other members of the team have been very impressed with Luck as well this year:

Regardless if you have a drop or a bad play or a missed assignment or whatever it is, Andrew's not one of those guys that's just going to, if you drop a ball and you're on this side of the field, look to the left side. He will go right back to you. And that's the great thing about Andrew and the rest of those guys. He's got amnesia and he understands that it's football and the guys that are covering those guys get paid to make plays. And so there's a combination of things that go into throwing and catching and all those things. So I think it's great that he's got the confidence in those guys to go right back to them and keep them involved."

"He's definitely stepped up his game, both as a player and a leader. He's a tremendous leader on and off the field, setting a great example for some of the younger guys. I think everybody stepped up their game. When a Hall-of-Fame wide receiver like Reggie Wayne goes down, it's hard to fill that void but you do everything you can to step up and try to fill the void."

"He knows how to approach the game and how to manage the game and how win games. He's the guy, his shoulders have definitely gotten a lot more broader and being able to support the team. And he's been very clutch for us this year."

"I was very, very impressed with him the first day he stepped onto the field back in OTAs a year and a half ago, two years ago. To watch him mature over the last years has been great. His leadership has always been there. I think as a rookie, it's a rare quality to have the leadership qualities that he has. But he took over the team and led. Obviously he's got all the physical attributes. He can run and he can throw. He can process and he's a smart guy and all that stuff. But I think he is just getting even more comfortable with his role. The thing that is fun is he doesn't make those quote unquote rookie or first or second-year mistakes. He knows if it's not there, throw it away and let's do this. I guess what I'm saying is he manages the game very well and gives us an opportunity to win games."

Andrew Luck has won over his teammates and has been incredibly impressive this season - and behind a quarterback playing at a very high level, the Colts offense looks really good heading into the playoffs.

Number of Drives: 9 (only including those with Andrew Luck in the game)

Number of Plays: 61 (only including those with Andrew Luck in the game) 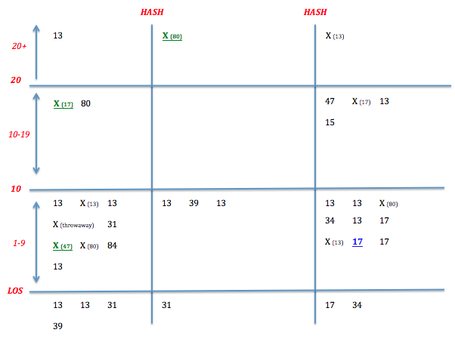 "That means Luck has been steadily getting better despite throwing to targets who, in some cases, weren't even expected to be on the roster. While New England's Tom Brady gets loads of credit for making something out of nothing because of the weaknesses in this receiving corps, there's a strong argument to be made that Luck's done the very same thing."