Chuck Pagano and his Staff Failed the Colts on Saturday Night

Share All sharing options for: Chuck Pagano and his Staff Failed the Colts on Saturday Night

I've learned a lot this season covering the Colts.  Perhaps the biggest thing I've learned is that the saying that the season is a marathon and not a sprint definitely applies to the way I analyze things.  I got too caught up in the failures of Chuck Pagano without seeing the big picture.  I don't take back anything I said, but perhaps some of the things I've written about Pagano throughout the year I shouldn't have written and should have waited until I saw the big picture more completely.

I look at it this way: you wouldn't judge a two hour movie based solely on the first half hour of it.  You wait until it's over so that you can best analyze it.  The constant and immediate analysis of football and sports makes that impossible, and that's not really a bad thing, but it needs to be prefaced by something very, very important: just because I point out the failures of Chuck Pagano or any coach does NOT mean I think he should be fired, nor do I want him to be.  Instead, my desire is to highlight his mistakes and errors in a fair manner to best evaluate what type of head coach the Colts have and to offer ways that Pagano needs to improve.

Because now I've seen the ending to this movie we called "the 2013 Indianapolis Colts season" (creative, right?), and it leaves more to be desired.  It was a good season, but it leaves you wanting more.  One of the biggest ways it does that is it makes you want better coaching, especially after watching the divisional round loss to the New England Patriots.

Let me be clear on this point: Chuck Pagano and his coaching staff really hurt the Colts on Saturday night.  There is a big difference between criticizing Pagano for mistakes and calling for him to be fired.  I'm not afraid to criticize him, but I have not once said he should be fired and you will not find me say that anytime soon.  But last night?  It was bad.

Let's just look at a few of the areas where the coaching staff failed in the 43-22 loss to the Patriots on Saturday night: 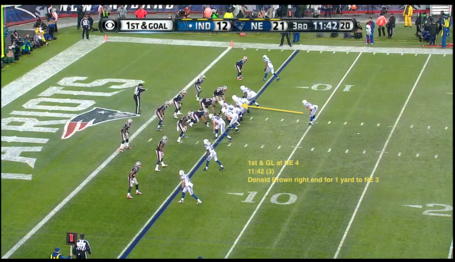 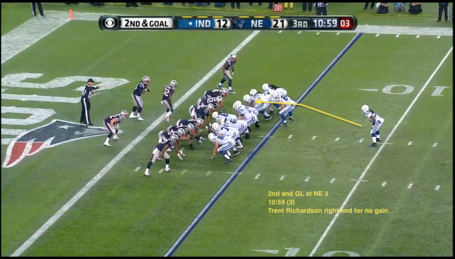 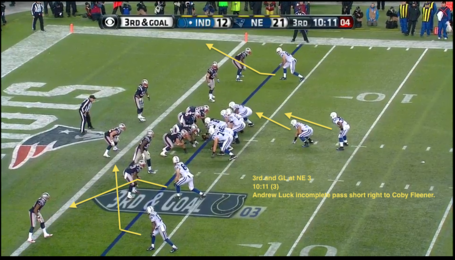 Those are just some of the in-game decisions that the coaching staff messed up on Saturday night.  That doesn't even mention the fact that Chuck Pagano's defense gave up 43 points, 234 yards, and 6 touchdowns rushing to the Patriots, along with 185 yards passing.  In two playoff games this year, the Colts allowed 87 points, 384 yards and 6 touchdowns rushing (4.68 yards per carry), and 548 yards and 4 touchdowns passing (7.72 yards per attempt).  That is a complete failure on the defensive side of the ball.  The blame needs to lie equally on general manager Ryan Grigson (for failing to provide quality players for the defense), head coach Chuck Pagano (who is really in charge of the defense), and defensive coordinator Greg Manusky (who might be the fall guy for the defensive failures).
If anything, this year we saw that Chuck Pagano has some good qualities as a head coach, that his players absolutely love him, and that his team is tremendous at overcoming adversity.  In no way have I given up on him as a head coach.  But this season also showed all too clearly that, despite back-to-back 11 win seasons and playoff berths, Chuck Pagano still has a lot of work to do as a head coach.  Remember, he just finished his second year as an NFL head coach.  He's 22-10 in the regular season and 1-2 in the postseason, with an AFC South division title, two playoff appearances, and a playoff win - and all of this just two years after a MASSIVE rebuild.  Consider even further that Pagano has only coached 23 games, including the playoffs - he's still learning as a head coach.
I'll cover it more in depth at a later date, but here are some quick thoughts on what Pagano can improve on:

I haven't given up on Chuck Pagano by any means, and I think firing him would be about the worst thing possible that the Colts could do - and I guarantee you that they won't.  But I'm also not going to sugar-coat the failures of the coaching staff, but rather point them out with hopes for improvement.  I think Pagano has several good qualities.  I think there are several areas he can improve.  I'm not nearly as down on Pagano as others, but he needs to improve.  Simple as that.

Oh, and also - Pep Hamilton will stick around, and that's the absolute right move that I completely agree with.  Greg Manusky is a big question mark, and I'm not sure of his future.  I don't think he has had a terrible year, but the failures on the defensive side of the ball are evident and he might be a fall guy.  If he is fired (not a certainty by any means), I'd like the team to look at Wade Phillips as defensive coordinator.  But that's getting ahead of ourselves.  First we have to see if they even make any moves.