Every week, Stampede Blue's Josh Wilson will take an in-depth look at Andrew Luck's game from the previous weekend. Today we look at his performance in the divisional game vs. the Patriots.

"When you lose in the playoffs, it is very abrupt," Colts quarterback Andrew Luck said following a season-ending 43-22 loss to the New England Patriots in the divisional round of the playoffs. "I'm wondering what to do. I feel like a lost puppy."

"I think everybody probably feels the same way, look forward to a great offseason and hopefully get over that hump."

Luck is the 24-year old franchise quarterback for the Indianapolis Colts, an emerging superstar comparing losing in the playoffs to losing a puppy. That's Andrew, for you. He's a guy who'd rather play a board game - Settlers of Catan is his favorite - than go out for a night on the town. He's a guy who'd rather have an old flip phone and have real conversations with people at the Colts complex instead of be constantly texting others. He's a guy who grows a neck beard that becomes a subject of many jokes, even as Luck realized that it probably wasn't the best look. He's a 24-year old who is respectful yet fiery. He keeps a calm about him and never gets flustered, yet also has a deep passion to succeed that seeps out in everything he does.

This isn't the profile of a superstar NFL quarterback. But that's where Andrew Luck is greatest - he's humble and he's a human being. He's just one of the guys. He's a quarterback but in a linebacker's body and with a linebacker's mentality - he often can't wait to get on the field and hit somebody. He leads by example, and despite being only 24-years old commands complete respect and is universally viewed as a leader of the Colts - even amongst the veteran players. I've had people remark to me that they've never seen a guy this young command so much leadership so quickly. That's Andrew.

The players love him - he's just one of the guys. The fans love him - he's a down to earth human being. And not only is he all of the above, he's a pretty dang good quarterback too. He just completed his second season in the NFL, and through 32 games, he has completed 682-of-1,197 passes (57.0%) for 8,196 yards (6.85 yards per attempt), 46 touchdowns, 27 interceptions, and has rushed 125 times for 632 yards (5.1 yards per attempt) and 9 touchdowns. He's also made five tackles, for what it's worth. He has also led 11 game winning drives and 8 fourth quarter comebacks (including playoffs) and 6 of them have come when he was behind by double-digits. He is off to the most prolific start to a career of any passer ever statistically. But that's not what makes him great. There are a lot of things that do: his phenomenal pocket presence and ability to 'climb the pocket,' his mobility, his toughness, his progression, his never give up attitude. But one of the best attributes Luck possesses is his amnesia.

When Luck makes a mistake, he very quickly shakes it off. We've seen it time and time again, most notably just two weeks ago when Luck overcame 3 interceptions and a 28-point deficit to win in the wild card round of the playoffs against the Kansas City Chiefs. Luck makes mistakes, certainly, but he has the ability not to dwell on them and to brush them off better than almost anyone there is.

And that's the point - he will make mistakes, and he will have rough days (he threw 4 interceptions this past week against the Patriots). But what we're seeing is a quarterback who just completed his second season in the league, who cut his interception total in half from his first to second year and only threw 9 in 16 regular season games this year. This isn't the finished product, and we have to take that into consideration. He'll make some mistakes and some bad throws, but the key is that he shakes them off and the very next drive comes out and hasn't lost any confidence. He's constantly motivated to get better, but he'll never beat himself up over failure. Failure is a necessary part of progress. It's a learning experience, and that's what this year's playoff experience will be for Andrew Luck.

The 2013 season didn't end the way the Colts or Andrew Luck wanted it to, but because of Andrew Luck, the future is bright and not every season will end the way this did. Soon, the Colts will reach their goal. Why am I so confident in that? It's because of the man under center, number 12. The one who loves board games, has a flip phone, and just shaved his neck beard.

And I also get the sense that he's sick of feeling like he lost a puppy, and he's going to work to make sure he doesn't feel that way again. 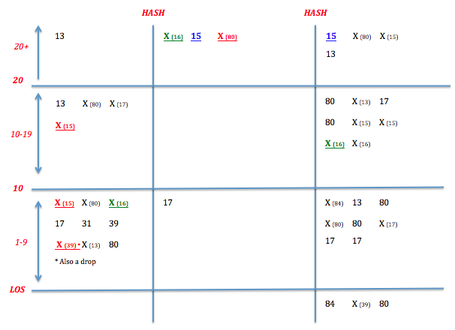 "Luck will eventually take the throne from Tom Brady and Peyton Manning, but the time's not now. It will come, you can count on it. Luck's too good and too much of a perfectionist not to let it happen."