Thanks For The Naked Andrew Luck Pic, Pat McAfee

Share All sharing options for: Thanks For The Naked Andrew Luck Pic, Pat McAfee

As Deadpsin and others posted last night, Colts punter Pat McAfee accidentally published a Twitter pic of a very naked Andrew Luck following the Colts 45-44 comeback win in the playoffs over the Chiefs. 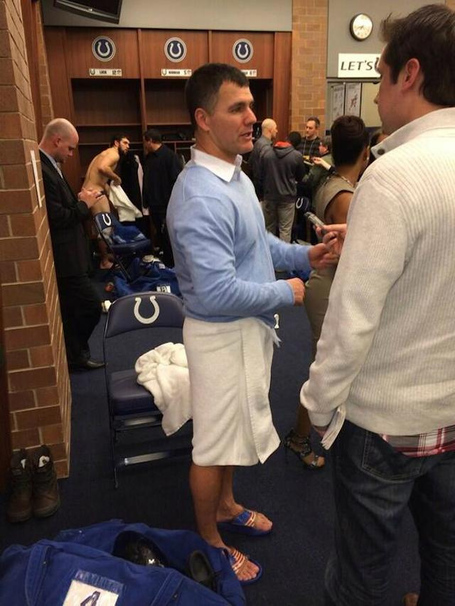 Because McAfee is good-natured in general, he's taking the screw-up in stride:

Oh boy.. Half naked Andrew in the back of that last one.. He looked damn good though

I like how Luck is seemingly weirded out by (I assume) QB coach Clyde Christensen standing there while he's attempting to get dressed.

Hey man, I got a free-wheeling dong here. Can you hold off on the QB notes until after I get from friggin' clothes on?

I also like the USA-themed flip-flops Vinatieri is sporting. Thank god he's wearing a towel.