Some Plays are Less Memorable but Not Less Meaningful

We'll all remember the touchdowns at the end of the game, but there were several key plays throughout the rest of the Colts vs. Chiefs playoff game that had a huge impact. Stampede Blue's Josh Wilson takes a look at a few of them.

Share All sharing options for: Some Plays are Less Memorable but Not Less Meaningful

Everyone will remember the touchdown.  The 64-yard bomb on the post route to T.Y. Hilton as Andrew Luck hit him in stride and the receiver streaked in to the end zone as the Colts took the lead for the first time, completing a 28-point comeback, as Lucas Oil Stadium erupted?  Yeah, everyone will remember that.

And everyone will remember Andrew Luck picking up a Donald Brown fumble near the goal line and taking it in himself, diving over the goal line for the score.  That will be the lasting image from this game - Luck's dive across the goal line (that's the lock screen on my phone right now, too).

Those are the plays that get remembered forever.  But there are countless other plays throughout the course of the game that have just as big of an impact on the way the game turns out.  I'll be the first one to admit that I haven't done a great job of highlighting those "unsung plays," so to speak, this year, and I apologize for that.  But I want to do that here, and I will point out a few plays that might have gotten lost in the euphoria of the aforementioned two plays (and understandably so) but that ended up having a big impact on the game.  I know I'll be leaving some out, too, so feel free to include them in the comments.  But here are some plays that had a big impact on the Colts' win Sunday but that you might not remember at first:

Nobody really paid much attention to this when it happened because we were all way too preoccupied with the utter awfulness of both Greg Toler and LaRon Landry on this play (but especially Toler).  Dwayne Bowe (the Chiefs' biggest playmaker with Jamaal Charles not in the game) caught a simple slant (beating Toler) and took off running.  He made Landry whiff badly and then made Toler look even worse on another missed tackle.  Bowe was off to the races, and it looked like another Chiefs touchdown (the game was tied 7-7 at that point).  Bowe had Junior Hemingway running with him and Antoine Bethea was still a few steps behind - and, hopefully for the Chiefs, Hemingway would block Bethea enough to allow Bowe an easy score. 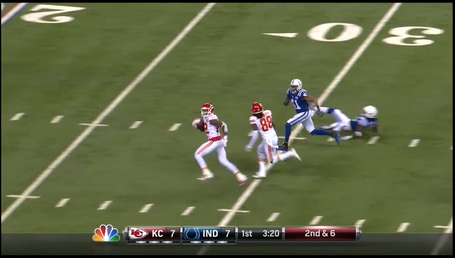 Instead, Bethea outran Hemingway, fought through a stiff-arm attempt from Bowe, and dragged him down from behind at the 2 yard line.  The play went for 63 yards and gave the Chiefs a first and goal from the 2 yard line.  And yet it ended up being one of the most important and unsung plays of the day for the Colts.  The next three plays featured an incomplete pass, a one yard run by Knile Davis, and then a 0 yard run by Davis.  Antoine Bethea's hustle play to chase down Dwayne Bowe and bring him down at the 2 yard line ended up saving the Colts 4 points, as the Chiefs were forced to kick the field goal - and remember, the Colts ended up winning by one point.  That touchdown saving stop by Bethea - a terrible defensive play that featured a great effort to not give up by Bethea - ended up being the difference in the game, you could say.  It shouldn't be any other way, either - Bethea didn't give up on the play.  The Colts never gave up on the game.

Even after Bethea's great play to chase down Bowe and prevent a touchdown, the Chiefs still faced a first down and goal from the 2.  The first play was an incomplete pass, and then a Knile Davis run for one yard.  That brought up a 3rd down and goal from the 1 yard line, with the game tied at 7.  The Chiefs handed the ball off to Davis again, and immediately defensive lineman Cory Redding burst through the line on the right side of the formation, forcing Davis back inside.  As Davis was forced back inside, linebacker Kelvin Sheppard filled the hole and Davis had nowhere else to go as the defensive line sealed off all other options.  Redding and Sheppard combined for a huge third down stop that forced the Chiefs to kick a field goal.  As mentioned in the play I just described above, the fact that the Chiefs got only 3 points there was huge and a huge turning point in the game, and while Bethea's play was phenomenal, Redding's play (along with Sheppard) was great as well. 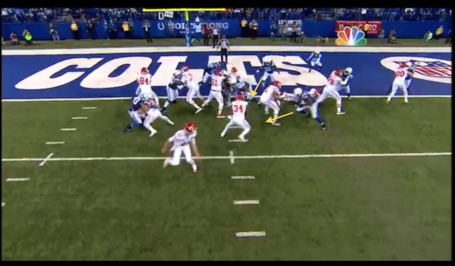 The Colts were already down 24-7 at this point early in the second quarter and were at midfield.  Showing his newfound aggressiveness that has been evident in the past few weeks, Chuck Pagano kept his offense out on the field on a fourth and inches play (that would have been a first down if Coby Fleener was a good route runner - he routinely runs his routes a yard or so shy of where he needs to be - that's absolutely on him and he absolutely must improve.  There are no excuses for that.)  When the Colts came out in the shotgun, however, I'll admit that I was skeptical and a bit upset.  I wanted a quarterback sneak - that seemed like the safest and most sure-fire way to pick up the first down.  But instead, it appeared the Colts were either going to pass it (risky) or hand it off to Trent Richardson on a draw play (even riskier, some might say).  I thought it would be a draw to Richardson.  The Chiefs thought it would be a draw to Richardson.  It wasn't.

Luck faked the handoff to Richardson on the draw, and the entire Chiefs defense crashed on the box to stop it.  But by that time, Luck had pulled the ball back and took off running around the left end.  Everybody was fooled.  Everybody. 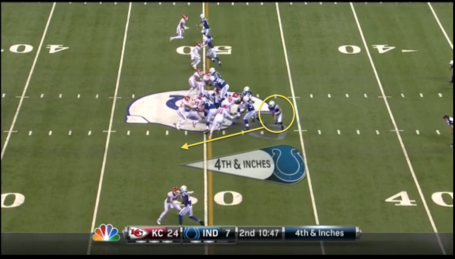 Mike Mayock noted on the TV broadcast that it was the first time all year Luck kept the football on a zone read play.  He kept it indeed, and he kept running for 21 yards untouched before sliding (very nicely, I might add - I was impressed) before the safety (who was playing very deep on the play) could chase him down and tackle him.  Had he not gone down on his own, he would easily have gotten another big chunk of yardage.

This one is the furthest from being a true "unsung play," but it deserves recognition here nonetheless because of how much Luck and Hilton's second half dominance has been in the headlines.  Of course, they needed their defense to get some stops, which they hadn't done all day.  The first time the defense actually stopped the Chiefs (and one of the few times they got pressure on Alex Smith) was thanks to Robert Mathis - surprise, surprise.  In the third quarter, the Chiefs were past mid-field with a 21 point lead and appeared to be driving towards another score.  And then, Robert Mathis changed the game.  Alex Smith dropped back to pass, and Mathis came blazing around the right edge.  He nearly got to Smith on that effort but was blocked out of the play as Smith then took off rolling to his left, still looking to throw.  Mathis came off the block and continued pursuit of Smith and caught the Chiefs quarterback by surprise as Mathis completely crushed him from behind, forcing a fumble in the process.  Kelvin Sheppard recovered the fumble for the Colts, but the play was all Robert Mathis.  He nearly got to Smith once, was blocked, fought off the block and pursued Smith on the rollout, hit him from behind, getting the sack and forcing the fumble.  Five plays later, the Colts scored on an Andrew Luck touchdown pass to Donald Brown to cut the lead to 14.  A drive that appeared as if the Chiefs would continue to march down the field and score (the Colts defense hadn't stopped them once up to that point the entire game) ended up being a turnover that led to a quick Colts' touchdown.  The strip/sack by Mathis was undoubtedly one of the biggest plays of the game and it had a huge impact in turning the game around.  It has been overshadowed a bit, however, by the brilliance of Luck's late scores, but that doesn't dim the brightness of Mathis's play - in fact, it makes it all the brighter.  Andrew Luck remarked after the game that, "When you've got Robert Mathis on your team, you've always got a chance."