Every week, Stampede Blue's Josh Wilson will take an in-depth look at Andrew Luck's game from the previous weekend. Today we look at his performance in the wild card game against the Chiefs.

Shortly after Andrew Luck threw his second interception of the game on Saturday, the Indianapolis Colts trailed the Kansas City Chiefs 38-10 in the wild card round of the playoffs. It looked over. It looked like the season was coming to a close. But instead, we learned one very important thing yet another time - never rule Andrew Luck out.

It wasn't the best Luck has played from a football standpoint. I mean, he threw three interceptions and while one of them should have been caught by T.Y. Hilton, it was still behind him. Luck missed on some passes and most significantly it looked like he began to force some passes in the first half. He was pressing. But Luck turned it around so beautifully in the second half that it was really stunning to see. The struggles made the success even that much better. It wasn't the best game Luck has played when watching his tape - certainly not worthy of the "A -" grade I gave Luck for the game. But there are some things that are just hard to quantify and hard to explain, and Luck had it on Saturday. A 28-point comeback? That counts for something. 5-total touchdowns, including the game-winner? That counts for something. Luck wasn't great at times - and yet, at the same time, he put together perhaps the most remarkable game yet in his career.

Read more on the great game Andrew Luck had in leading the Colts back from the huge deficit - my article from Sunday is here.

Number of Drives: 13 (not including a drive consisting of only 3 kneel downs to end the game)

Number of Plays: 62 (not including 3 kneel downs to end the game) 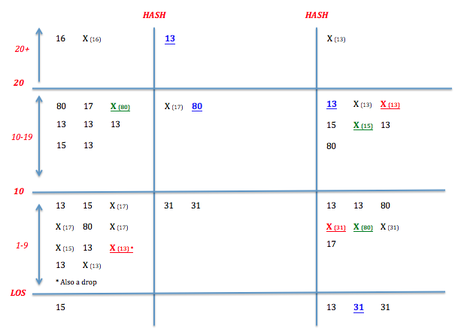 <blockquote class="twitter-tweet" lang="en"><p>Game is a good summation of where Andrew Luck is in his development: some really rough decisionmaking sprinkled in with some fantastic play</p>&mdash; Smart Football (@smartfootball) <a href="https://twitter.com/smartfootball/statuses/419621835001856000">January 5, 2014</a></blockquote>

"Andrew Luck is so rare, so precocious and so able to put the past behind. The distant past, the recent past. He did it in the middle of a 38-10 debacle Saturday that became a 45-44 win over Kansas City. And he did it a year ago, after a four-turnover game at New England. Last year, I remember his quarterbacks coach, Clyde Christensen, telling me, "He's a great forgetter. He came in that Monday [after losing 59-24 to New England], and I said to him, ‘Look, I know you beat yourself up all night, but you're a rookie, on the road, playing Belichick, big game, and you drive us 80 for touchdowns in your first two drives. That's big-time. We'll work on the other stuff.' And he knows.""

"It's more than that. There's a nastiness and desire that the greats like Tom Brady possess. Luck doesn't have the Super Bowls yet, so some will say this "greatness" talk is premature. That's not unfair. Yet it is also accurate to say we are seeing something special. This is what we saw early on with Favre and Dan Marino and Warren Moon and a handful of others. We saw something that's hard to calculate and grasp. We knew it was special and just hung on for the ride."

"This is the foundation upon which legends are formed. This is why Luck has every chance to some day be remembered as one of the greatest quarterbacks ever to play this game. Not simply because of his arm or his legs, but because of his force of will."

"Well now he's gone and done it. Andrew Luck may go on to have a long and storied NFL career, with a bevy of postseason victories and stirring comebacks to his credit before he hangs up his helmet for the final time. But he may never top what he wrought in his first career playoff win, an epic rally from a 28-point second-half deficit Saturday evening at a delirious Lucas Oil Stadium."

"Instinct is a major part of what makes Luck great. He's a master of feeling pressure while keeping his eyes downfield. He reads defenses like a 10-year veteran. He knows the exact moment to flee a collapsing pocket. This was a human born to play quarterback at a supreme level."

The Colts are not a great team. They'll be a considerable underdog regardless of their opponent next week. But the quarterback gives them a fighting chance. Saturday represented the franchise's greatest moment since ... well ... they drafted Andrew Luck."

"There's been some great ones," Pagano said, still smiling in disbelief. "But (Andrew Luck is) gonna go down as probably one of the best, if not the best, ever to play this game when everything is all said and done. We're very, very fortunate to have No. 12 on our side.""

To anyone who was in Lucas Oil Stadium on Saturday, or watched this epic on NBC, or just heard about what happened, Pagano's words didn't even seem the slightest bit over the top."

"He's always been a different animal in the fourth quarter, his whole life. And just even hearing the story from his uncle (and agent) Will (Wilson). He relishes those moments. It's like (Michael) Jordan when he'd take that last shot -- he wants the ball. This guy, we're so blessed, he wants the ball in those situations. Other guys don't want the ball; they want to hand it off. They don't really want it -- they're gonna be half-stepping it."

"A lot of guys, you throw those three picks, and you get defensive and you get conservative and you get scared, and you just can't pull the trigger, because you don't want to throw a fourth. He's the opposite. He gets mad at himself, and you look in his eye, and he's going, 'No, we are gonna drive this thing down there, I'm not gonna do that anymore.' ... You see the resolve in his eye. That's a rare quality, a great quality to have, and he has it."