After every game this season, Tyler Brooke will be breaking down a couple of plays from the matchup. This week, Tyler breaks down the Week 4 win against the Tennessee Titans.

The Indianapolis Colts are back on track after two straight blowout wins against the Jacksonville Jaguars and Tennessee Titans, but they still have work to do if they're going to make a run at the Super Bowl.

Andrew Luck and the offense have started to find their rhythm over the past couple of games, with the former No. 1 overall pick throwing for 393 yards, four touchdowns and an interception in last week's win. However, there are still some concerns with the defense, especially after the four-game suspension for LaRon Landry.

There will be more concerns as the season goes on, but for now, let's take a look at a couple of plays from last week's game for Stampede Blue's weekly film breakdown. 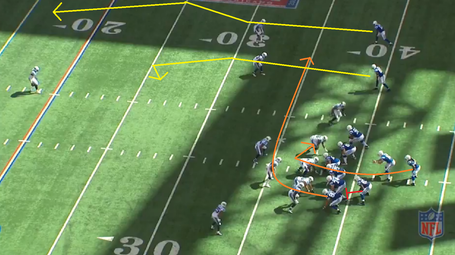 The play-calling on Sunday was more aggressive than we're used to seeing from Pep Hamilton on offense, as the offensive coordinator continued to throw in some deep play-action passes with run-heavy personnel.

With essentially eight men in the box and a single-high safety, the Colts run a play-action fake and have their two receivers on the right side go deep. The only other routes being run are by Coby Fleener cutting inside just a few yards downfield and Trent Richardson as a dump-off pass right in front of the line of scrimmage. 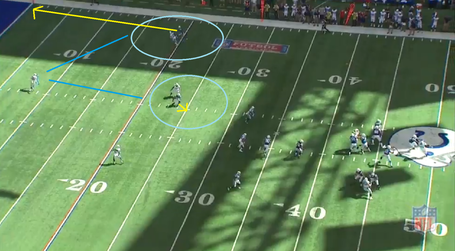 Because of the deep routes from Reggie Wayne and T.Y. Hilton, the safety Bernard Pollard is forced to stay home and keep both receivers from getting behind him. Unfortunately for the Titans, Hilton already has a step on Jason McCourty, and Luck does not hesitate in getting the ball out. 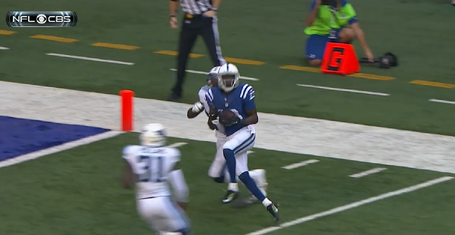 By the time Pollard finally gets to Hilton, it's too late. The third-year receiver makes the catch and is just short of the end zone for a 37-yard gain. One play later, Trent Richardson is able to cross the plane for his first touchdown of the season. 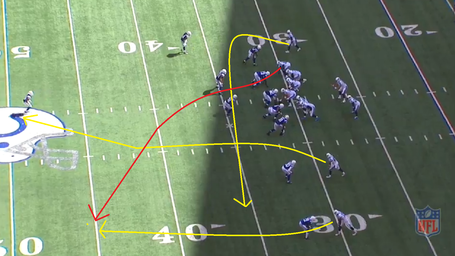 One of the biggest problems with the Indianapolis defense this season has been containing opposing tight ends. Delanie Walker was no exception last week, as he went off for 84 yards and a touchdown on five receptions, making him easily the biggest threat in the passing game from last Sunday.

The Colts are playing man coverage on this play, with Josh McNary matched up against Walker. The deep routes from the receivers on the left wash out the defensive backs playing deep and leave Walker, whose route is pictured in red, with only McNary to beat on the play. 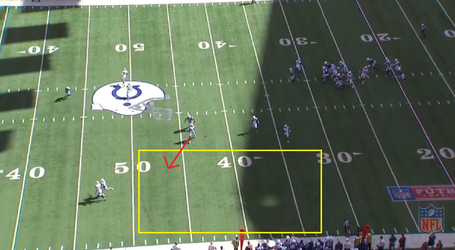 Because of the man coverage, the left side of the field is wide open for Walker, who is able to easily outrun McNary and get into space for the catch. 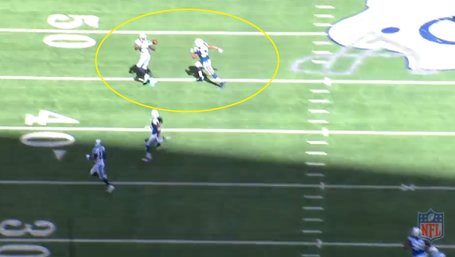 The play goes for 31 yards and is the biggest gain of the game for the Titans. The inside linebackers are continuing to have trouble covering these tight ends, and if that can't change when Jerrell Freeman returns, then the Colts may need to look at an upgrade at the position via free agency or the draft this offseason.