Looking at Where the Colts Currently Stand

With the NFL Draft now over, let's look at where the Colts currently stand in terms of the depth chart.

Share All sharing options for: Looking at Where the Colts Currently Stand

The NFL Draft has now come and gone, and with it the last real chance for teams to legitimately improve their roster for the 2014 season.  Certainly, there are still undrafted free agents, veteran free agents, and then cuts after training camp - and don't forget trades, either.  But after the draft, most of the rosters in the NFL are pretty well set as to what we'll be seeing the following season.

Because of that, I thought it'd be a good time to take a look at the Colts roster, and below I've compiled the 90 players on the roster right now into a two-deep depth chart.  Two important notes on the depth chart: this is my projection of the depth chart at this moment in time.  There's no guarantee this is the same one the Colts would have at this moment, and of course it's likely to change.

Additionally, I went through each of the projected starters and labeled them as either above average, average, or below average (also meaning I have serious questions about them).  After the breakdown, I'll address every position that I had a below average guy as the starter at and explain both my reasoning for that and what I think the Colts will do (and need to do) moving forward. 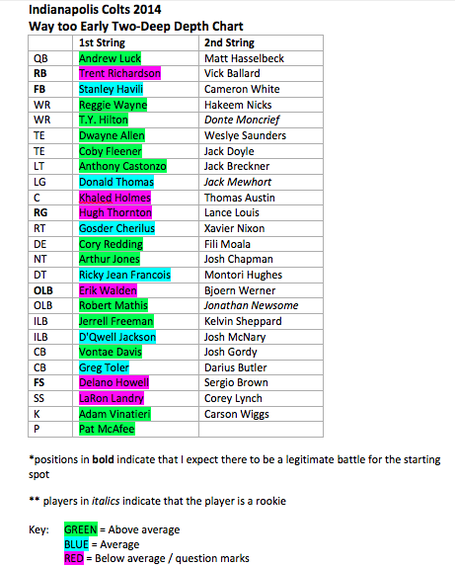 One very important thing that I want to stress is that just because I labeled a guy as below average or with question marks means I think he will remain that way.  While in Trent Richardson's case he was terribly below average last season, I think he will be an average back this year and continue to improve.  But there will be competition at running back, and Vick Ballard and Ahmad Bradshaw should both challenge Richardson for significant playing time.  Expect it to be a running back by committee this year, with the team going with the hot hand - like they did last season.  Richardson needs to show improvement this year (and I think he will), but if he doesn't the Colts have two good backs to step in and fill in the hole.

The only reason that I labeled Khaled Holmes as red is because there are question marks about him.  Honestly, I probably should have created a label for someone who is an unknown but instead I lumped it into this category - which is why Holmes is here.  I'll be the first to tell you that my opinion on Holmes starting next year has come a long way in the past few months.  Initially, I thought that the fact he couldn't get into the starting lineup last season must mean that there are serious, serious question marks about him - and that might still be the case.  But instead of viewing this as a position where the Colts must add a starter, I now view it as one where they need a good backup in case things don't go well with Holmes.  I actually feel perfectly fine with Khaled Holmes starting this season - the only concern I have is that since we just don't know how Holmes will do in the NFL and this is a team competing for a Super Bowl, there isn't a legitimate backup plan if Holmes struggles or gets hurt.  Start Thomas Austin?  He's ok, but does that really make you feel better than starting Holmes?  Move Donald Thomas to center?  Move the rookie, Jack Mewhort, to center?  The Colts have options and Ryan Grigson apparently feels perfectly fine about the position, but I wonder about the depth.  I can absolutely live with Khaled Holmes starting this season, but the lack of a backup plan still scares me a bit.

Hopefully, after a year of experience and with him likely moving back to his more natural position of right guard, Hugh Thornton will improve a lot this year.  Because, let's face it, he was often the team's worst lineman last year, even more so than Samson Satele at times. He was thrust into the starting lineup as a rookie due to injury and so therefore I'm more than willing to give him more chances to be the starting guard, but he absolutely must improve this year or else the Colts must look to bench him.  The guard spot looks like it is one with depth, as Lance Louis, Joe Reitz, and possibly even Jack Mewhort could step in if need be.  Hugh Thornton will have the inside track to the starting spot and I think that's the way it should be, but he was bad last year and he must show improvement early this year.

I hated the signing when Ryan Grigson made it and, to a degree, I was pleasantly surprised by Erik Walden on the field last year.  He rushed the passer better than I expected and he wasn't as terrible against the run as I feared.  Still, however, the hope is that it's only a matter of time before Bjoern Werner begins taking a lot of his reps.  The reason they're playing him at the linebacker spot behind Walden and not the rush linebacker is so that last year's first round draft pick can get on the field more and not have to sit behind Robert Mathis, who certainly isn't coming off the field that much, as he's the defense's best player.  Walden still can be a weakness against both the run and the pass, though to be sure he wasn't as bad as I expected him to be.  Really, this position depends on how Werner continues to develop, and hopefully he can continue to take increased reps, because Erik Walden isn't the answer at this position.  Hopefully Bjoern Werner is, but we just don't know yet.

I thought Delano Howell's play last year was actually pretty good, and if he played that way this season then I would have absolutely no issue with him as the starting safety.  But because I have some questions, I put him in the red category.  The questions I have are whether he can stay healthy for a season and whether he can keep up the level of play he did last year while handling the starting duties full-time.  Last year he was a fill-in starter due to injury, but can he handle the full-time role?  I actually think he can, but we'll have to see.  As far as injuries go, he actually hasn't been what you would call "injury-prone" but instead just suffered an injury last year, so I'm hopeful that it was just a one-time thing.  Because what the Colts absolutely don't need is two injury-prone starting safeties - that might be where they'll miss Antoine Bethea the most, in that he never missed a game.  I like Howell, but now he'll likely be thrust into a bigger role, and we'll see whether he can handle it.  The way I see it with Delano Howell is that you can do better for sure, but you can also do much, much worse.  And whether you like it or not, he's the best option of anyone the Colts have on their roster to start at free safety, and I'd be surprised if he doesn't start.

If you asked me the question of which Colt has the most pressure on him to perform this year, I wouldn't say Trent Richardson.  I'd say LaRon Landry, because the Colts absolutely need and are depending on him to.  He was bad last year, and there's no way around it.  But he has a lot of talent (he was a pro bowl player just two years ago) and hopefully he can play to that talent - while staying healthy, of course.  Since the Colts didn't address either the free safety or cornerback position in the draft, they're counting on the players they already had.  Vontae Davis is a legit top-tier corner and Darius Butler is great in the slot, and as I mentioned previously I think that Delano Howell will do a solid job as the starting free safety.  Greg Toler should do fine at the other corner spot, as long as he's healthy.  But what the Colts need Landry to do is to step up and play at a high level, and we'll see if he can do it.  He won't be getting benched anytime soon, but he needs to step up.