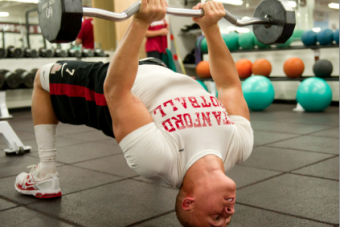 Few teams have suffered more injuries than the Indianapolis Colts have over the last half-decade. Football outsiders ranked the 2013 Colts 31st in adjusted games lost to injuries. Fans have long searched for a common factor, some hoping to discover a "cure" for the ever-present injury bug. Some fans hold an almost superstitious belief that the turf in LucasOil stadium is responsible for the slough of injuries. Others simply think that the Colts have been unlucky, or even cursed. And naturally, some have blamed the strength and conditioning staff for failing to properly prepare their players for NFL contact.

I consider myself to be in the latter camp. Although NFL teams keep their training methods somewhat confidential, everything I've read has led me to believe that the Colts strength and conditioning program is slightly outdated. This problem is obviously not attributable to any one strength coach, for the Colts fired their strength coach in 2012, and yet their injury luck has not changed.

It would seem to me, then, that the flaw within the Colts training and conditioning program lies not within the staff so much as the philosophy of the program itself. After firing Jon Torine in 2012, the Colts hired Roger Marandino to take over the strength program. If you read his profile, you may notice that his resume places a heavy emphasis on his knowledge of olympic style lifting and his previous career as a professional power lifter.

This tells me that the Colts as an organization believe that football conditioning is at least similar to the conditioning that a professional lifter or body builder would undergo. That is a serious problem.

We traditionally imagine football players doing most of their training in the weight room, gritting their teeth, benching or squatting weights heavy enough to bend the bar, trying meet weight goals, yet members of a new generation of coaches believe that this is the wrong way to train football players. I will describe two of these new coaches: Chip Kelly of the Philadelphia Eagles and formerly of the Oregon Ducks, and Shannon Turley of the Stanford Cardinal. Both are considered pioneers in football conditioning, and although their methods are different, they are similar in one crucial way: Neither gives a rat's ass how much their players can bench, squat, or clean.

Olympic style lifting (or any lifting for that matter) plays only a marginal role in either's program. With its extremely heavy emphasis on running, Kelly's program, "Sportscience," seems more suitable for a track or cross-country club than for a football powerhouse like the Ducks. Some of his players even complement their workouts with ballet. But despite these non-traditional workouts, Oregon still regularly sends players to the NFL, even linemen who, according to more traditional training practices, should have spent more time in the weight room. As if that wasn't enough, the Ducks also enjoyed a remarkable lack of injuries during Kelly's tenure there. This off-the-field success has followed Kelly to Philadelphia, which reaped the benefits of having one of the least injured teams in the NFL in 2013.

Oregon has been one of the most successful college football programs since Kelly's arrival in Eugene in 2007, but it has had to compete with another Pac-12 powerhouse, the Stanford Cardinal. Although Stanford's rise to football prominence is often fairly attributed to talented coaches like Jim Harbaugh, Vic Fangio, David Shaw, Greg Roman, and Pep Hamilton, one of the keys to Stanford's sustained success has been "Kissick Family Director of Football Sports Performance" Shannon Turley, who many consider to be the best strength coach in college football. Turley, referred to in Palo Alto as "the Technician," was never a major weight lifter, and looks more like a scientist than a strength coach. This is fitting, for Turley minored in chemistry and majored in human nutrition, food, and exercise at Virginia Tech. He also ran track.

Like Kelly, Turley sees no point in keeping players in the weight room for long periods of time. His program stresses learning how to move on the football field rather than being able to lift heavier weights. Most Stanford freshmen spend weeks working out before they ever set foot in the weight room. Most of Turley's workouts focus on "body weight" exercises, such as push ups, pullups, lunges, and squats. "For football," said Turley in an interview, "to be able to push other guys around, that's more important than lying on a bench doing bench press, or putting a bar on your back and doing squats. We got to get our elbows in, our knees bent, our eyes up, and focus on pushing another object." The belief that teaching a player how to move on the football field is superior to developing the muscles used for those motions in the weight room has not only allowed Turley to turn two-star recruits into All-conference players, but has also ensured that Stanford stays among the healthiest programs in college football. In fact, Turley claims that "Injury prevention is first and foremost in our training system. Our goal is to implement the most comprehensive player development program in college football. I will use methods from any discipline of training that I am confident and credible in teaching. Simplicity and execution."

"I don’t care how much guys can bench, squat, or power clean, it has nothing to do with playing football. Football is blocking and tackling. It’s creating contact, avoiding contact and gaining separation if you are a skill guy on the perimeter. That’s football."