Colts quarterback Andrew Luck has been tremendous so far this season.

At halftime, Luck was apologizing.  Apologizing to his teammates for an awful interception that allowed the Titans back into the game near the end of the first half.  "That's the kind of guy he is," defensive end Cory Redding told Scout.com's Phillip B. Wilson. "That's why we love him so much. He's such a competitor. Out of all the stats he did today, he's more upset about that INT because you want to be great, man. It's about greatness. That's awesome."

The interception is what Luck remembers.  Everyone else remembers the number of great plays the Colts' quarterback made today.  Colts fans have known that Andrew Luck is special for a while.  This year, Luck is putting up the stats to make the rest of the league notice the same.

Against the Titans today, Luck completed 29 of 41 passes (70.7%) for 393 yards, 4 touchdowns, and a pick.  In the last two weeks, Luck has led the Colts to back-to-back dominating victories, becoming the first Colts team since 2004 to score 40 or more points in consecutive games. Their 1,027 yards of offense in the past two weeks combined are the most in a two-week span in Colts history.  In those two games, Luck has completed 60 of 80 passes (75%) for 763 yards, 8 touchdowns and 1 pick.  He was named the AFC's Offensive Player of the Week last week, and we'll see about this one (he's got a good shot).

His 13 touchdown passes through the first four games of the season is a Colts record - breaking the franchise record set by Peyton Manning (11). 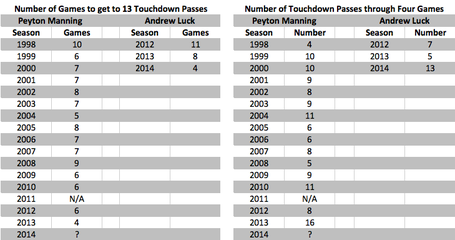 Luck currently leads the NFL in completions, attempts, passing yards and passing touchdowns (though there are still two games to be played this week and a few teams on bye weeks).  He's the first quarterback in NFL history to record consecutive games with at least 370 passing yards, four or more touchdown passes, a completion percentage greater than 70%, and one or fewer interceptions.  That's what Luck has done this year in the last two games.

"He's in the zone right now," Colts head coach Chuck Pagano said today.  "Anytime you go out there and play fast and you're not thinking, usually the result, is the numbers, you know the yards and the touchdowns that he's producing right now. And he's got some great playmakers around him who are making great plays too."

"I think we're blessed with a bunch of great playmakers, guys that need the ball in their hands, and as a quarterback that's what you want," Andrew Luck said.  "You want guys that go out there and make plays and then when you feel the defense focusing on one guy or two guys, we think our matchup can win every time wherever it is on the field. So being able to spread the ball and get everybody involved is important and it worked tonight."

Luck said he wasn't really aware of his statistical accomplishments so far this season, and when asked what has led to the incredible start, Luck answered that he wasn't sure.  "It's just the way the games have gone."

Talk all you want about what Luck has done wrong, or what other quarterbacks have done right.  The fact of the matter is that sooner rather than later Luck needs to get serious MVP consideration if he keeps this up.  He's on a phenomenal pace this season.  Hopefully, he can keep it up.