As we inch close to Thursday’s NFL Draft, I thought it would be interesting to narrow down a group of players who I feel would be great additions to the Colts. This list is by position and includes prospects who could be available with any of the Colts current projected picks. These prospects are players who could not only provide competition all along the roster but many could work their way into starting roles. 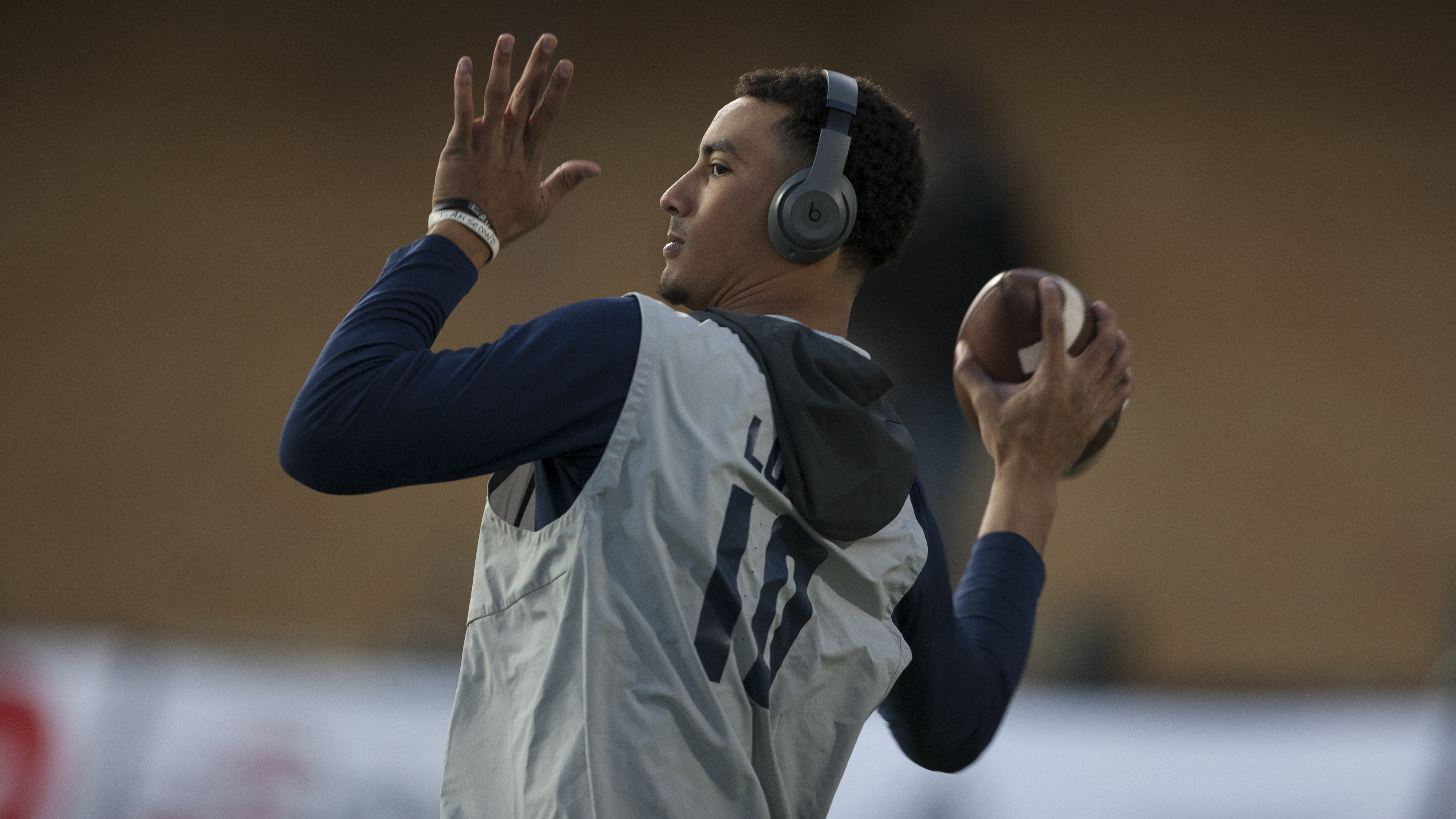 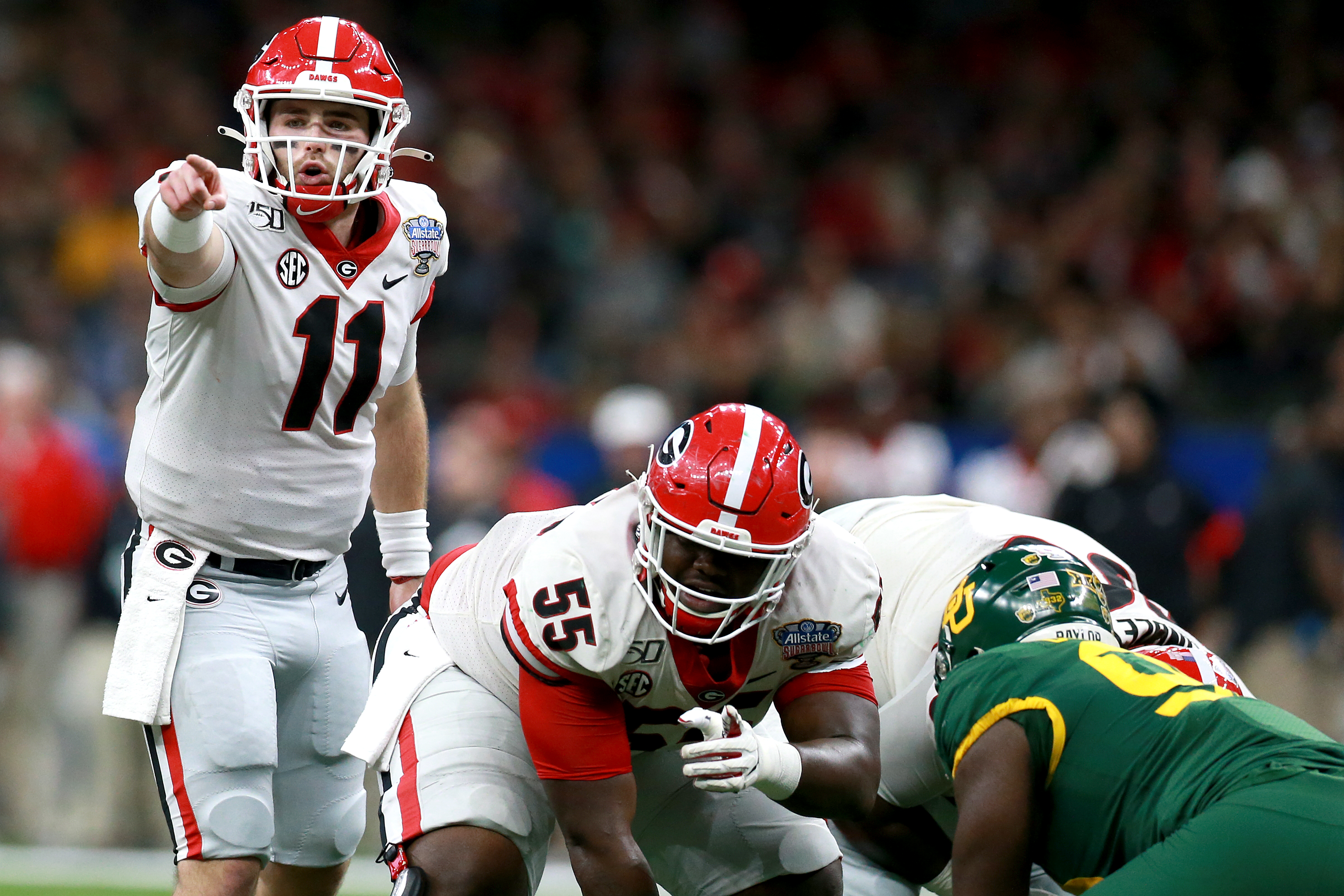 The Indianapolis Colts are searching for a long-term franchise player at the quarterback position. Philip Rivers is about as solid of a bridge quarterback as you could ask for and it appears unlikely that Jacoby Brissett is being seriously considered the long-term solution — if he was, it would make more sense to keep him as the starter now.

Love is likely not ready to start right away. He could use some time to develop like Patrick Mahomes or Aaron Rodgers. He could learn a lot from Rivers who has no reason not to groom his potential replacement as he has stated an intention to play no more than two more years.

He is a high ceiling, potentially low floor player. He has the athletic gifts that make playing quarterback in the modern professional game look easy but he also will need to learn how to play in a pro scheme, which includes pre-snap reads and adjustments. He is criticized in part for some of the same shortfalls that plague Brissett at the position — namely locking on to receivers and failing to move through his progressions.

If Love doesn’t fall late into the first, where Ballard feels comfortable trading up, or to one of the Colts second round picks, the next tier of quarterbacks will get interesting. Names like Jacob Eason and Jalen Hurts will demand a lot of attention.

One that has been often overlooked is Jake Fromm. Fromm as a prospect has a much lower ceiling than Jordan Love but also likely a higher floor. He is more pro ready and could meaningfully be ready to take over in a year or two. He is not a modern day athletic quarterback like a Mahomes, Wilson or Jackson but behind a solid offensive line he might not need to be particularly mobile.

At the very low end, he seems like he could be a viable long-term backup. Which the Colts will need after Brissett leaves. Fromm could slip into the third round or possibly to day three. 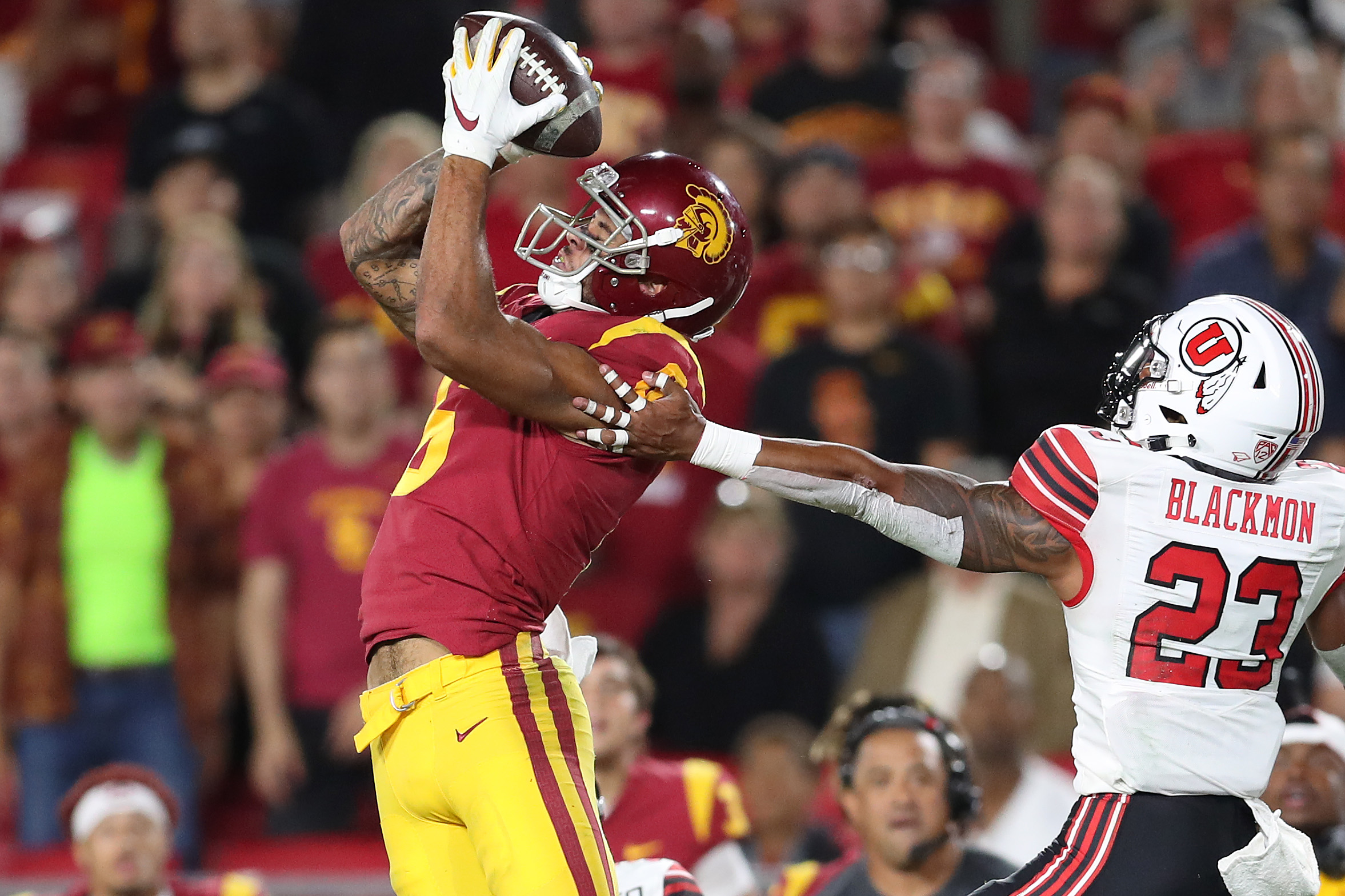 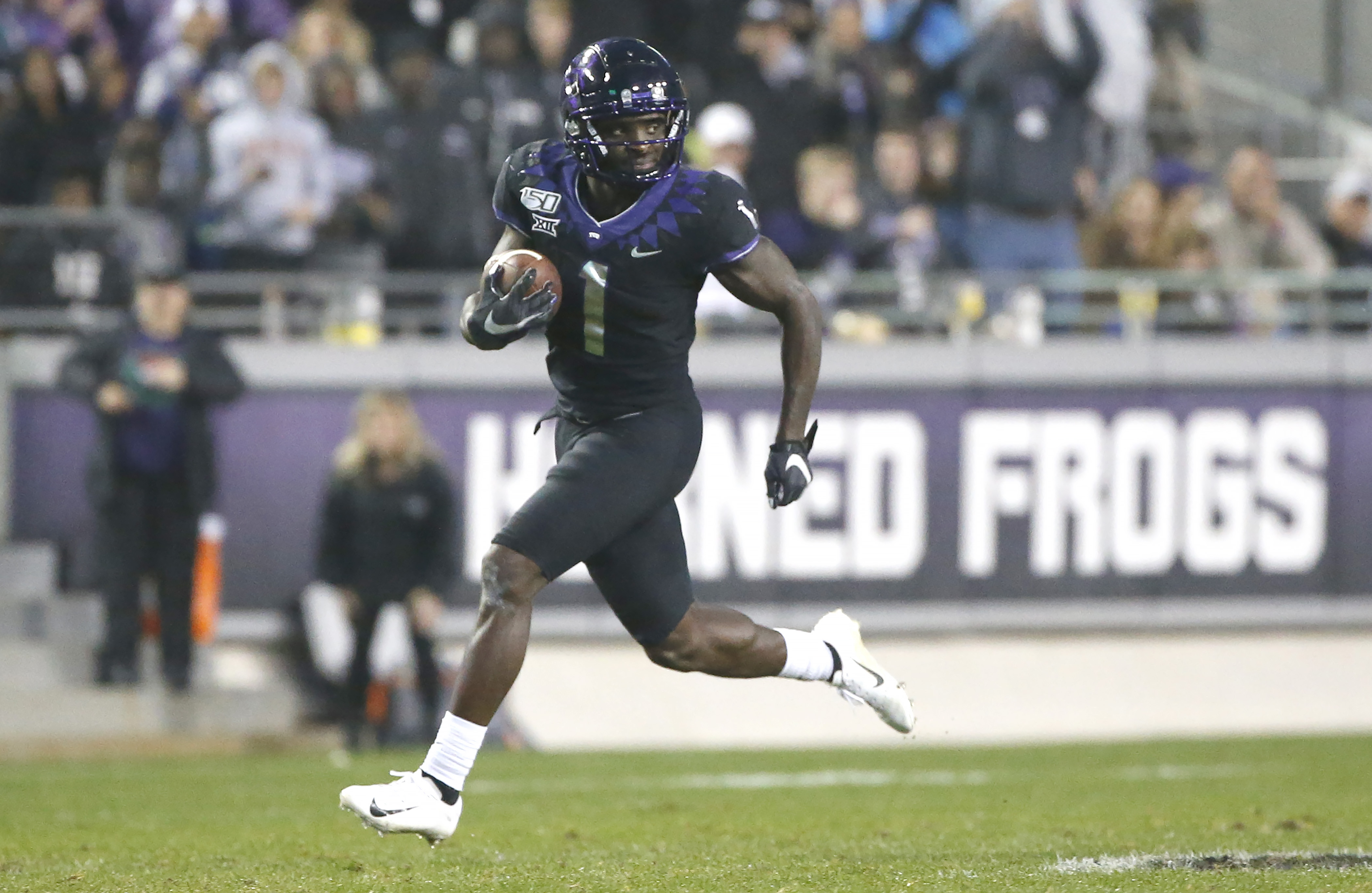 With wide receiver as arguably the biggest team need heading into the 2020 NFL Draft and no movement in free agency to address the position, it will be no surprise if the Colts use one of their second round picks. Given how incredibly deep the position group is this year, it wouldn’t be surprising to see Ballard double or triple down if he feels the need to do so, as he has with other positions in the past.

This position group will require more prospects than others as there are so many good players and possible position fits. We’ll start with two players who could be available in the second round — though most mocks have one of the two off of the board in the first.

Perhaps no wide receiver prospect jumps off of the page more (in the second round) than Michael Pittman Jr. Philip Rivers like to stretch defenses vertically and isn’t shy throwing the ball up for his big receivers to grab. He has a long history of doing so with the Chargers and receivers like Keenan Allen and Mike Williams are just two of the most recent larger receivers he has used as primary weapons.

What sets Pittman apart is that he comes along with the type of character and leadership, on and off of the field, that Ballard and his front office seem to value very highly. His athletic gifts differ very little from the other top big bodied receivers in this class so this aspect of his game and his experience could make him an earlier target than some might expect.

He is also pro ready and has traits you want with anyone in the wide receiver room. He runs precise routes, makes contested catches as good or better than anyone in the class, is among the elite group in this class in terms of his hands in general, and has the size to be a red zone nightmare for opponents.

Another primary target for the Colts is Jalen Reagor, if he falls. Son of former Colts defensive lineman Montae Reagor, Jalen is a speedy receiver who can make big plays with the ball in his hands. He uses his speed and open-field elusiveness to add yards after the catch and turn a relatively innocent looking completion into a big play.

One issue with Reagor is that he is so similar to players already on the roster. He could be a long-term replacement for T.Y. Hilton and step into his role but otherwise will be competing with Hilton and second-year speedster Parris Campbell for opportunities. The other question is, will college players with speed as a primary attribute translate as well when they play against equally speedy athletes in the NFL? 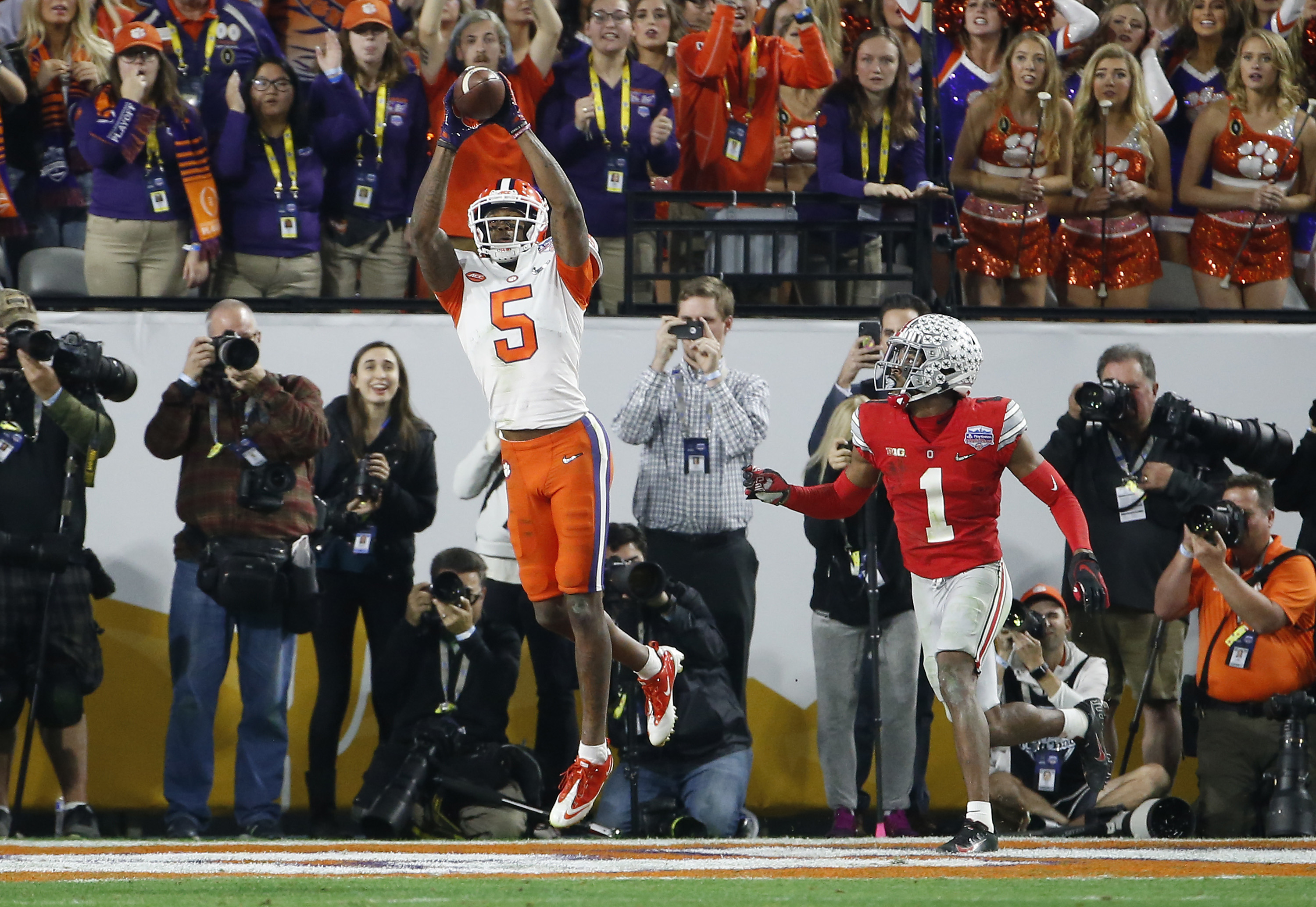 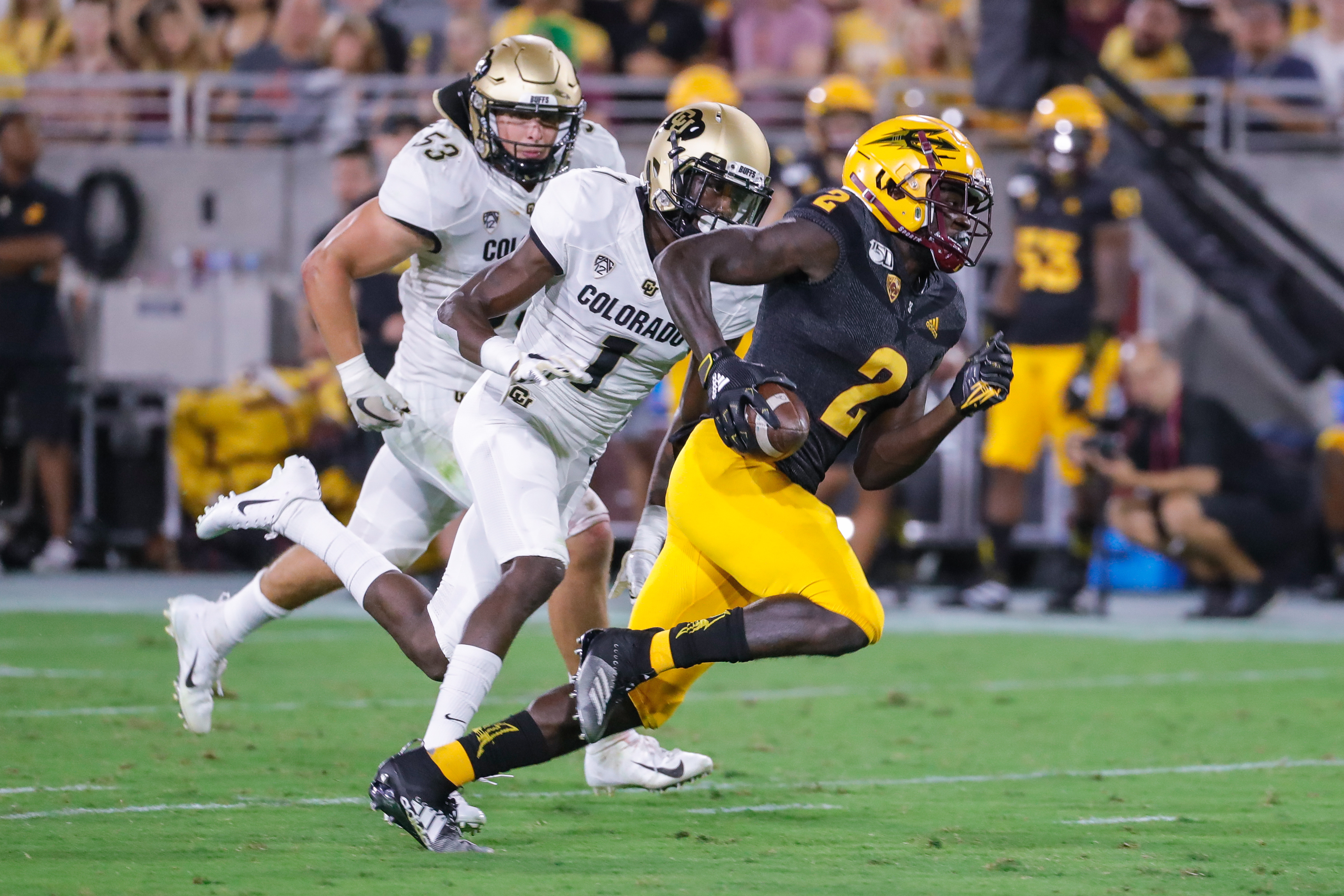 If this comparison looks awfully similar, it should. Tee Higgins compares to Michael Pittman Jr. in much the same way Brandon Aiyuk compares to Jalen Reagor. The former are both big bodied receivers who can make contested catches and win on the goal line — they are also both solid run blockers (something the Colts value).

Aiyuk and Reagor are both weapons with the ball in their hands in the open field and can create yards after the catch by making defenders miss. Neither is particularly gifted as a blocker. Both could add something in the return game. I like Pittman over Higgins — barely — and Reagor over Aiyuk but any of these four players will improve one of Indy’s primary weaknesses. 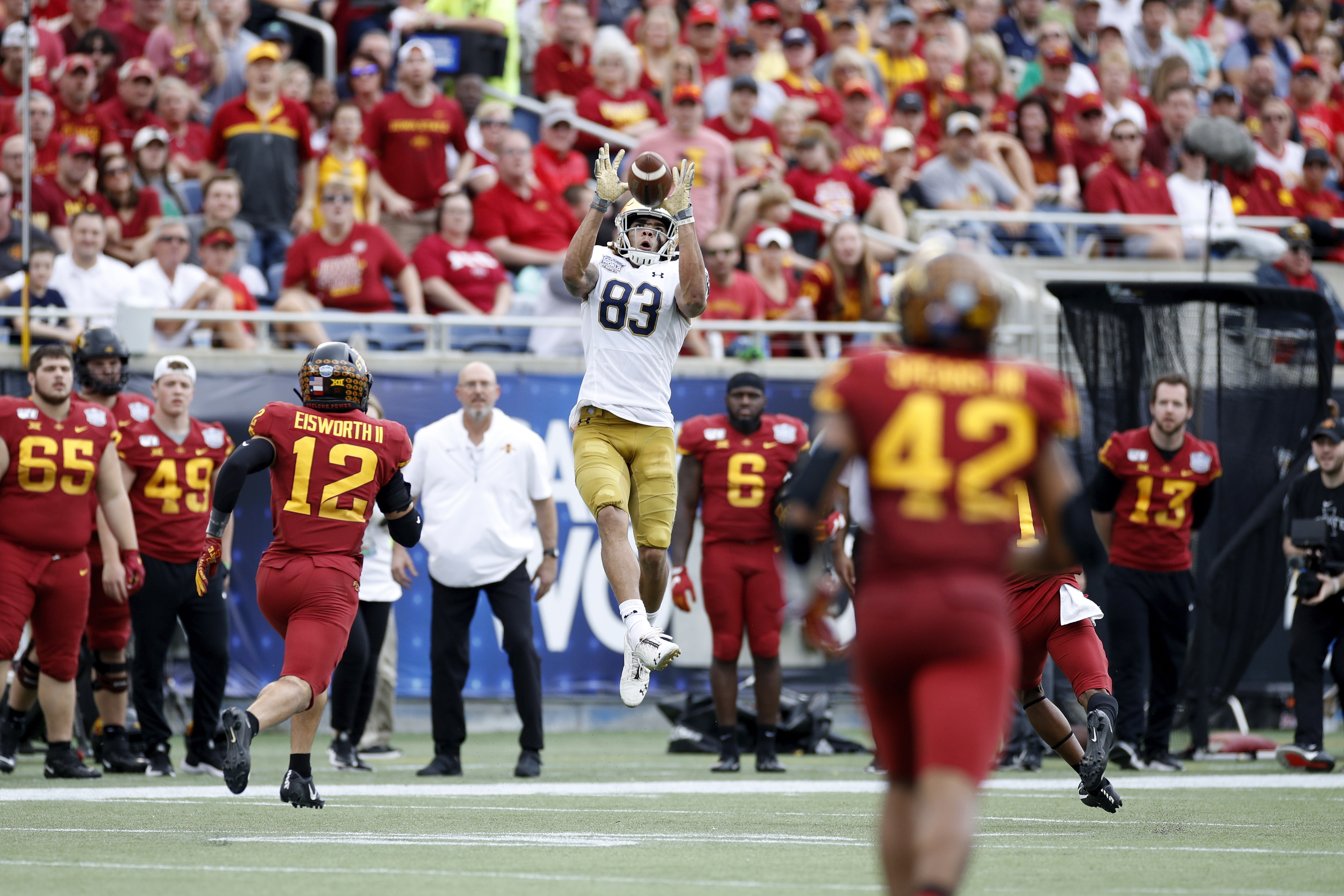 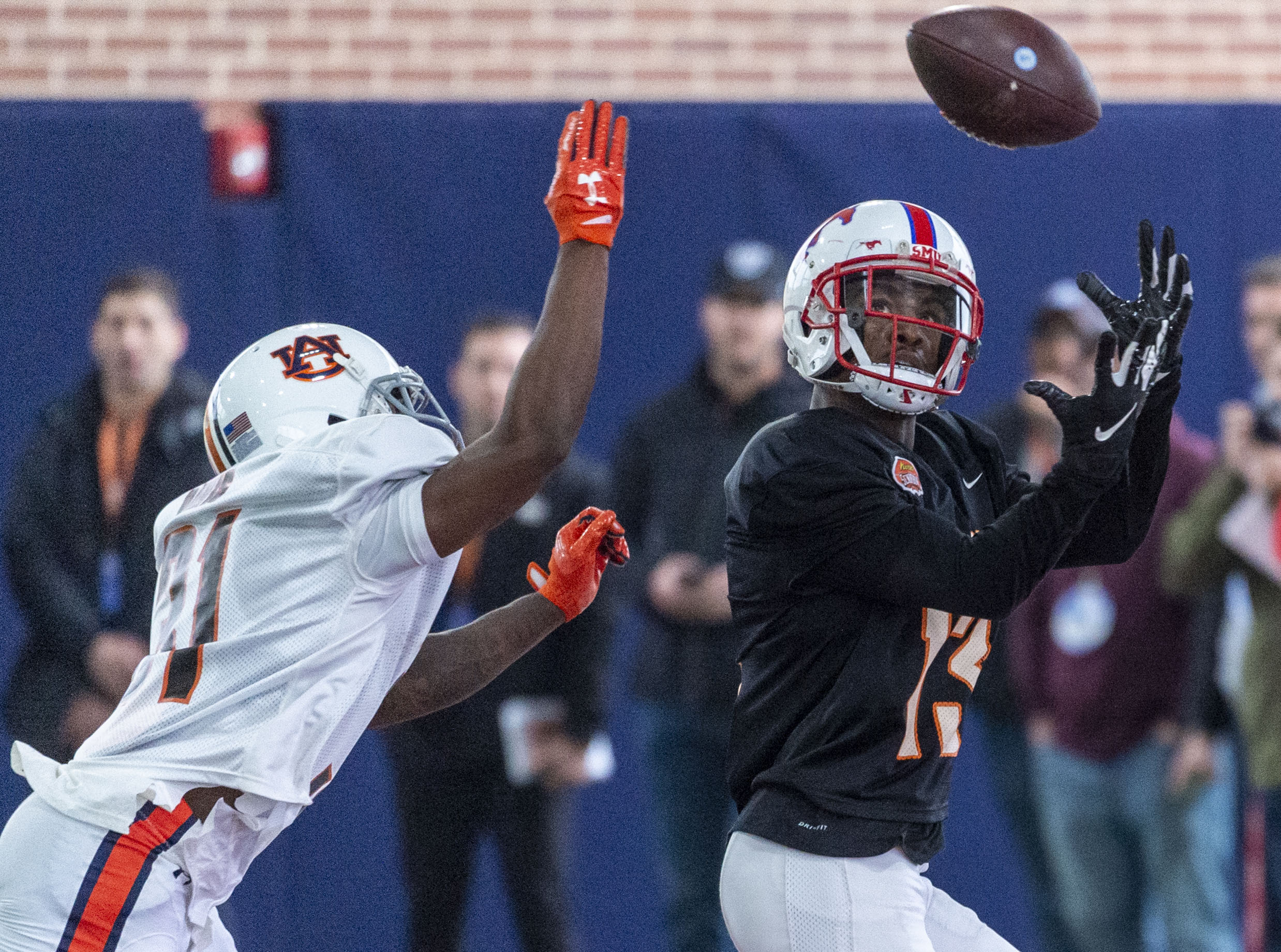 The final pairing is Chase Claypool and James Proche. Claypool also fits in the Pittman and Higgins conversation as a big bodied pass catcher who is a goal line target. He might be a candidate to move over to tight end and fill in the Eric Ebron role that has been vacated.

James Proche is talented wide receiver who has been overlooked in this extremely talented class. He stood out to me as the second most impressive player in wide receiver drills at the Combine, behind CeeDee Lamb. He might have the best hands of any receiver in this class and plays much bigger than his size. Few receivers at 6-foot nothing made a college career out of making more incredibly difficult contested catches than Proche. 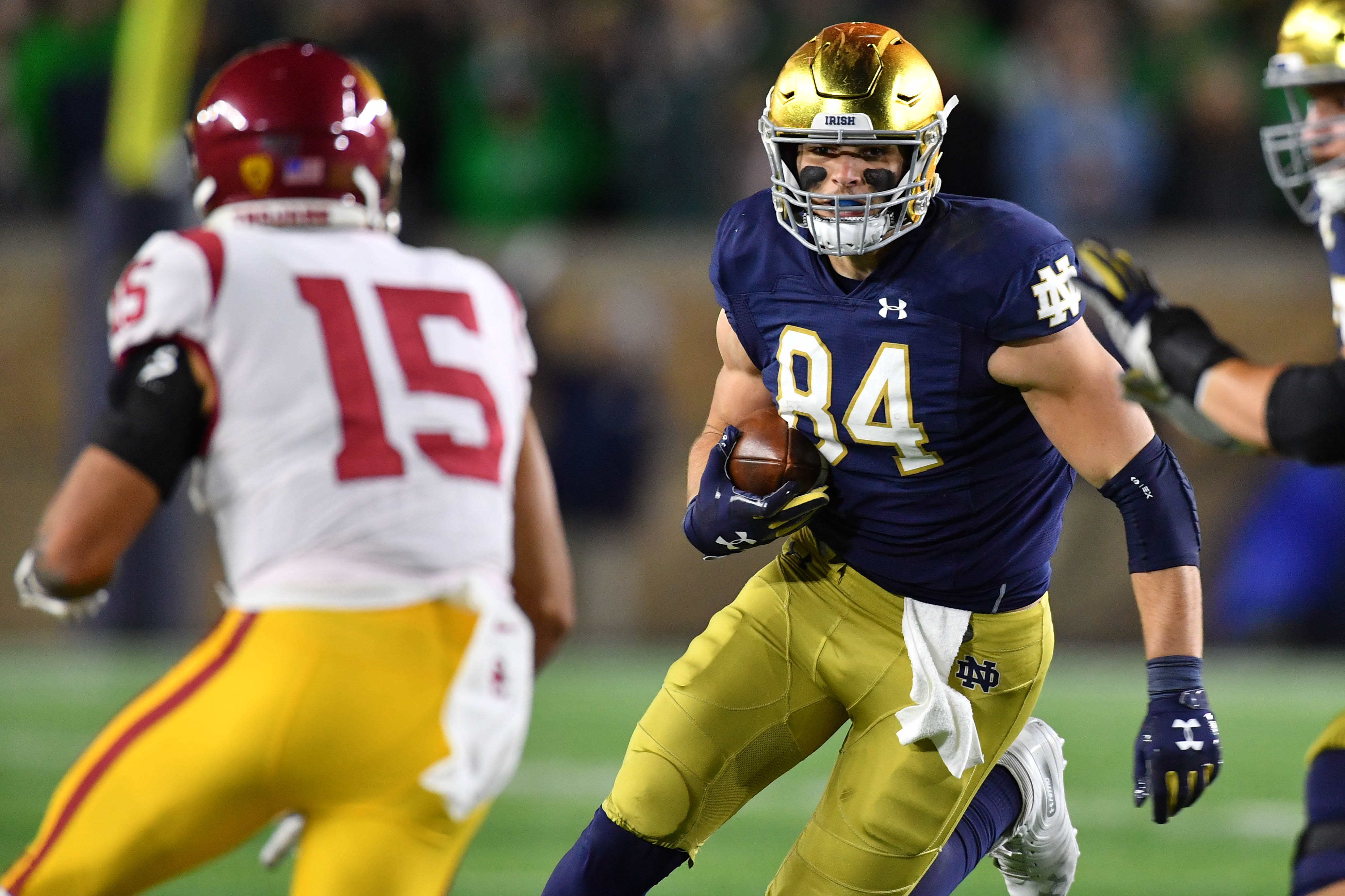 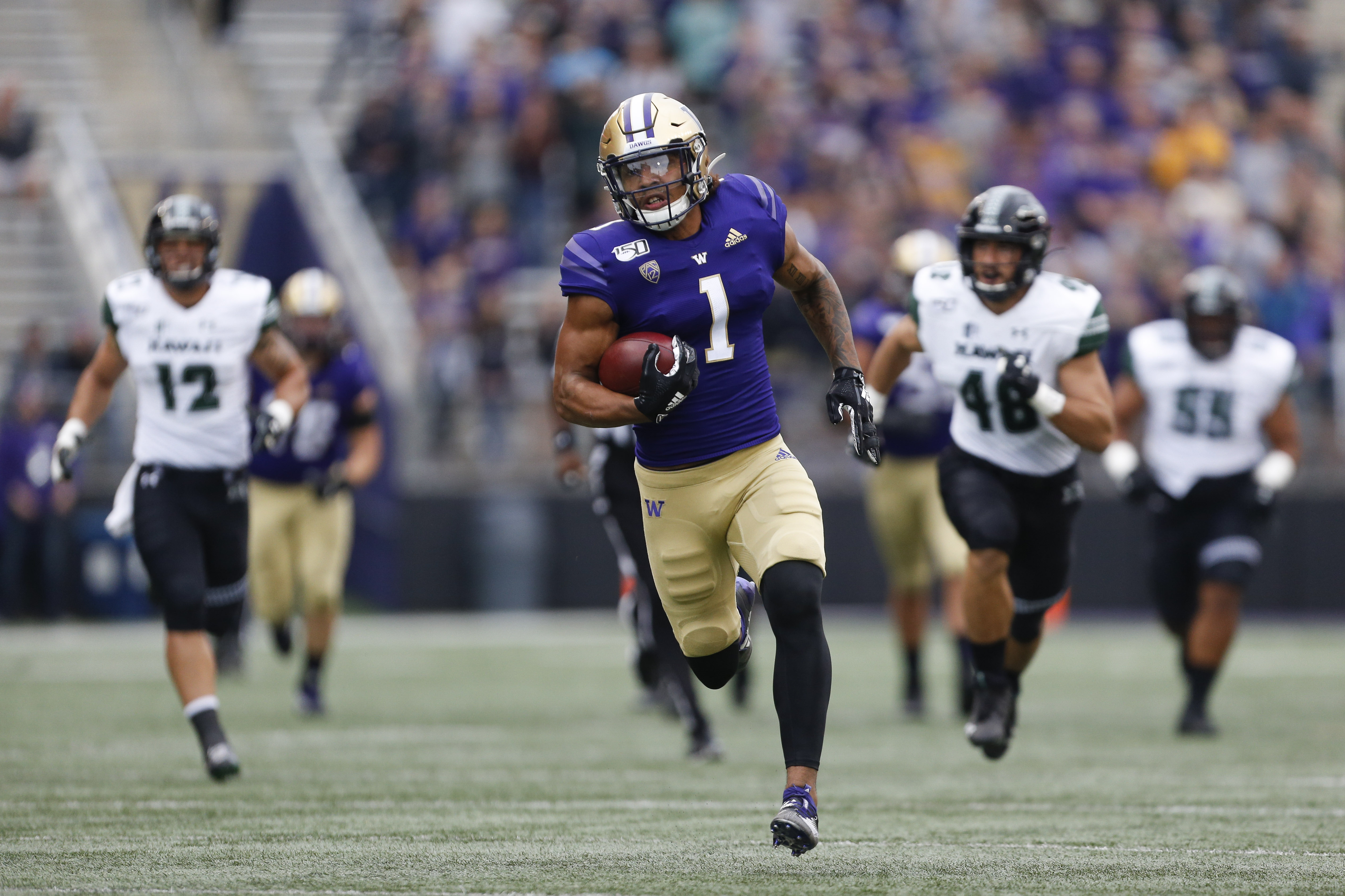 With Eric Ebron signing in Pittsburgh, the Colts could use at least one more body at tight end. Signing a full back this season will likely keep the active tight ends on the roster down to three and none of the current players are proven field stretchers or receiving weapons.

Mo Alie-Cox played through a broken hand last season, limiting his role to blocking only. He flashed the ability to haul in some big passes two seasons ago, including a highlight reel one handed grab in Oakland. Jack Doyle is as well rounded and trustworthy as one could ask a player to be at the position but is starting to get up there in age and isn’t really an offensive weapon in the traditional sense.

In an ideal world, the Colts could snag Cole Kmet in the second round as a do-it-all three down prospect. He has the size, speed and athleticism to be a weapon in the passing game and the functional ability to play as an inline blocker. Sadly, this tight end group isn’t spectacular and he could be the only true three-down player and with 32 teams trying to find answers at the position, he might go earlier than people think.

An alternative would be adding a player who could play in a rotational role like Hunter Bryant. He is a match-up nightmare for linebackers due to his speed and ability to make contested catches. He is too big for most DBs to handle one-on-one as well. He is not going to be an effective inline blocker and would have to rotate in to give the offense new looks. In that role though, he could develop into the type of weapon Eric Ebron was in 2018. 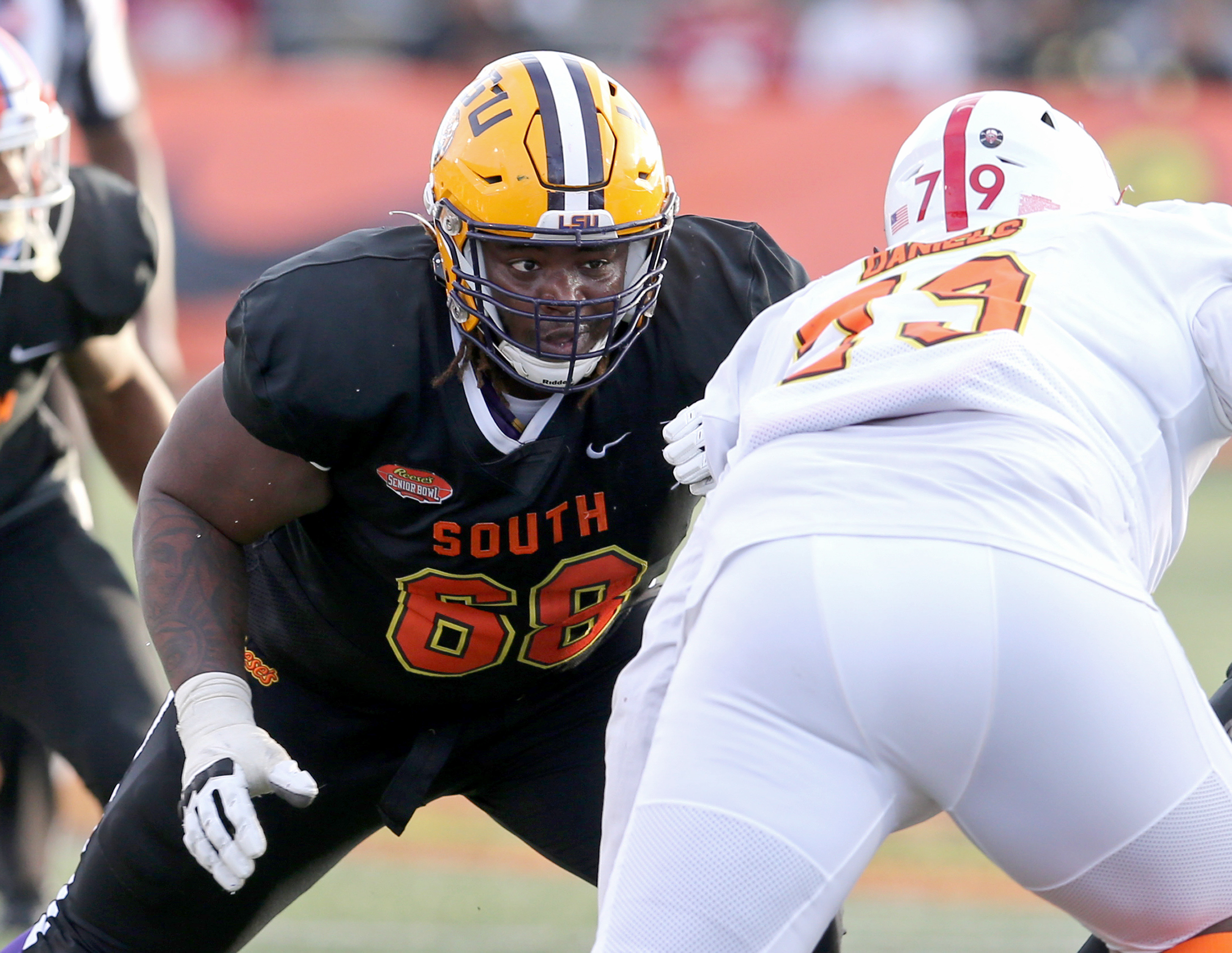 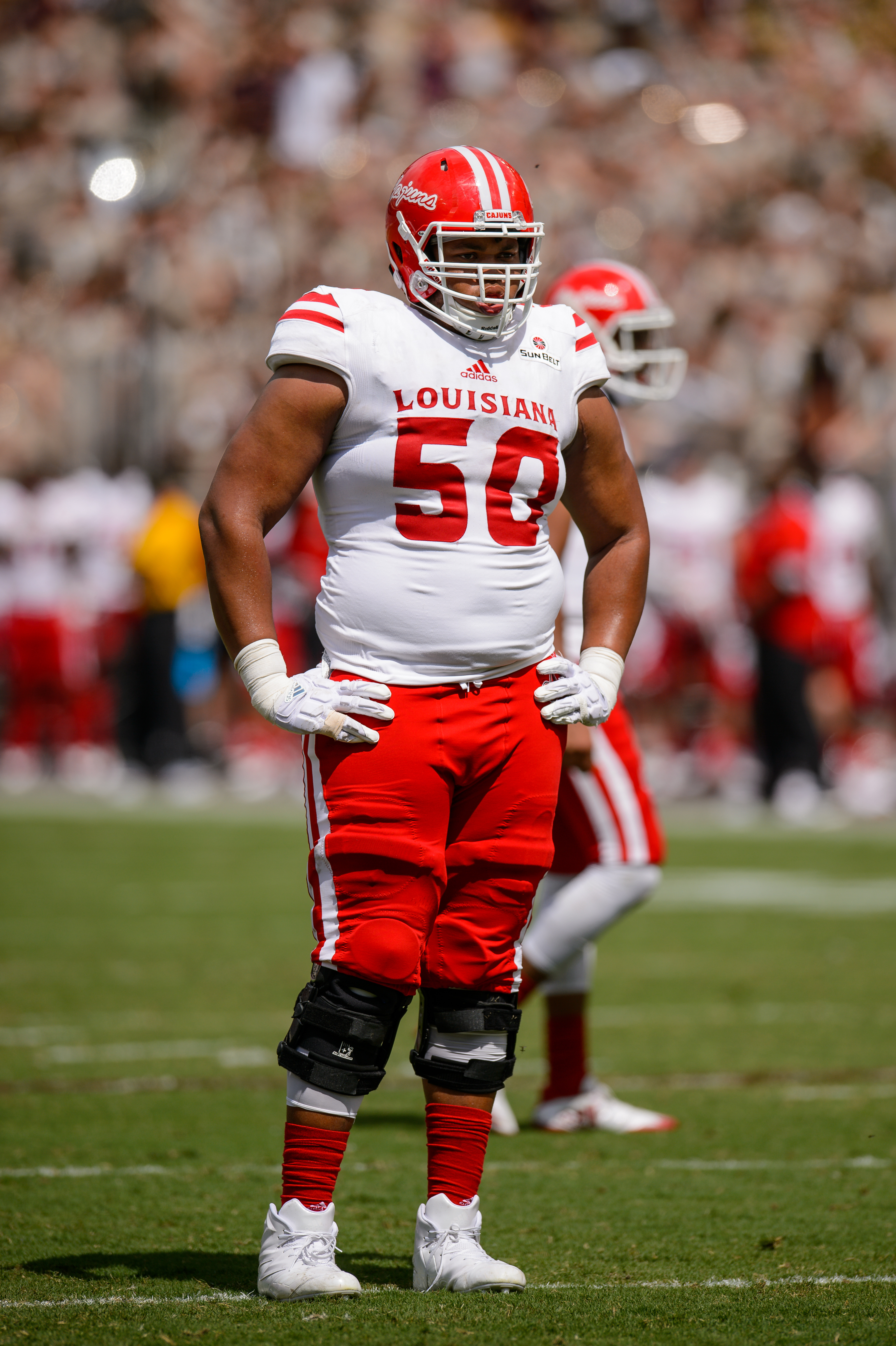 While the Colts had the luxury of using the same starters for every game in 2019, there is little depth behind the starting group now that Joe Haeg and Josh Andrews have left in free agency. A mid-round selection on a player like LSU’s Damien Lewis or Louisiana’s Robert Hunt could provide that depth and push a player like Mark Glowinski for a starting spot at right guard.

Lewis is a big bodied mauler who doesn’t have the athletic gifts of Quenton Nelson. Still, in a phone booth, he will look to own his man and should be a positive in the run game. His biggest weakness as a prospect is that he doesn’t really possess the ability to move outside at all and would have to learn to play the center position if he wanted to provide a backup to Ryan Kelly.

By contrast, Robert Hunt is a player who can play all over the offensive line. He may be best suited on the inside but pushing him out to tackle if needed is at least a consideration. Trying to fill the shoes of a player like Joe Haeg is difficult but Hunt is a reasonably similar option who could push to Glowinski for starting reps at right guard. 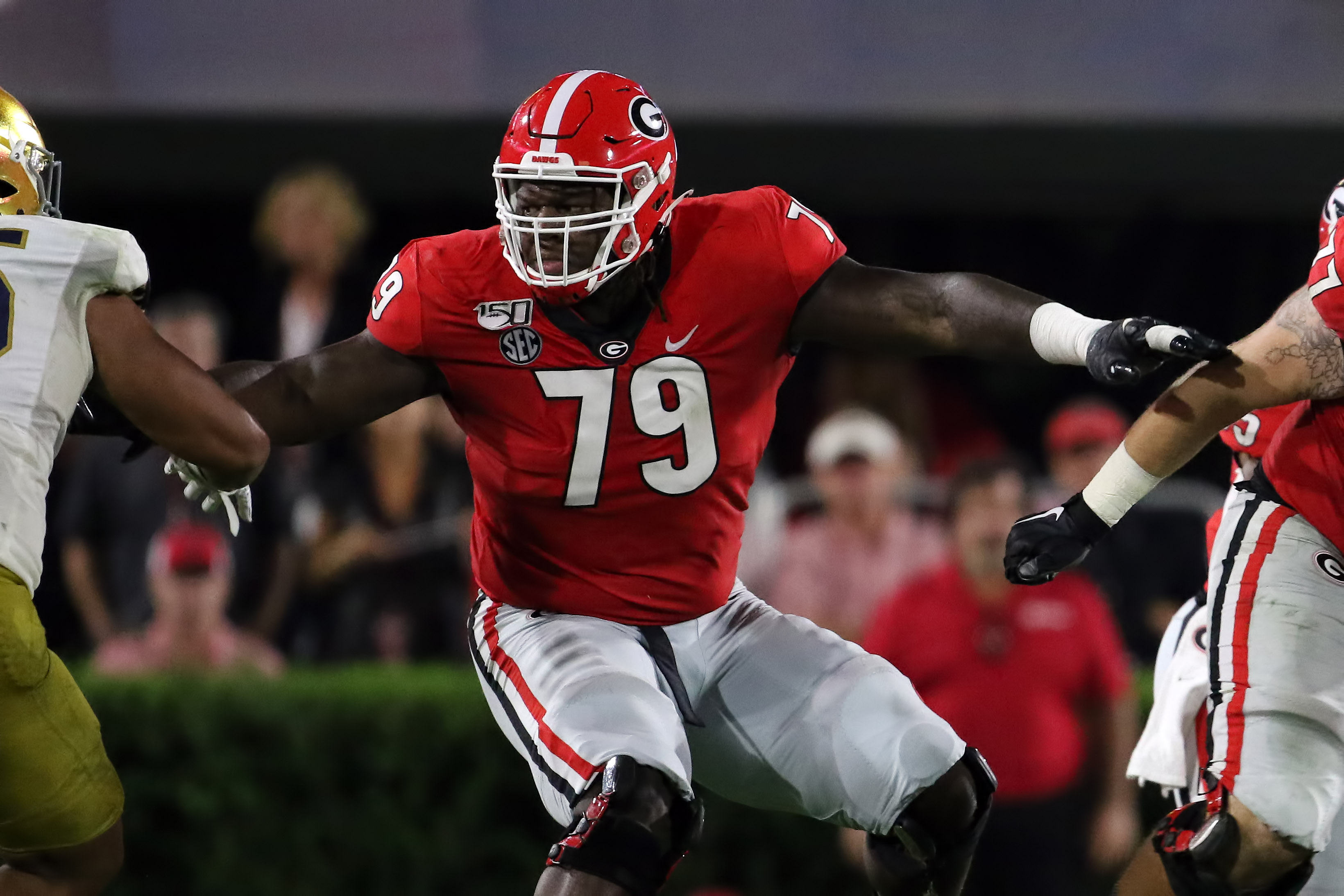 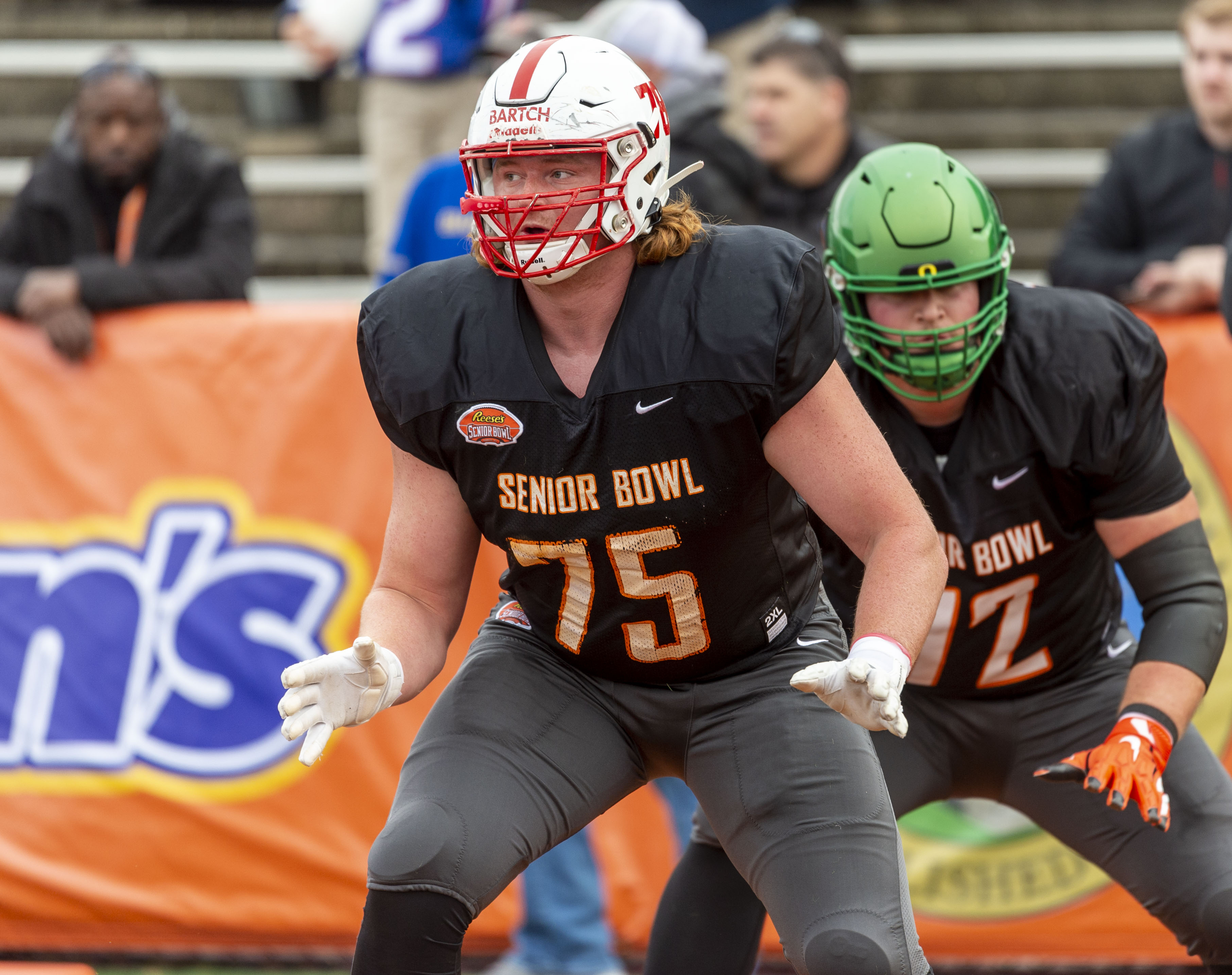 The 2020 NFL Draft includes a very strong offensive tackle group. It will give the Colts opportunities to position for a future without Anthony Castonzo and help fill in for the loss of Joe Haeg as a backup. Early in the draft, a second or third round pick might be used on Isaiah Wilson or Ben Bartch.

Wilson is similar to Lewis in that he is a huge bodied player with the power to stifle NFL caliber athletes. He is ridiculously athletic for his size. He may be primarily used on the right side of the offensive line but he could push in year one or two to start on the right side somewhere and with training and conditioning, could be serviceable on either side of the line.

Ben Bartch and Robert Hunt are similar in that they have some positional flexibility. He is the type of player Chris Ballard will likely appreciate and will bring a blue collar, lunch pail attitude with him to the next level.